The Guggenheim and Warhol

My memories are like motes of dust; occasionally they sparkle and when they do I must capture them and pin them down like formaldehyde stunned butterflies. Sometimes the memory itself stuns me; as if I too have been dipped in the capture jar. Old Nabokov always liked a drop of his Killing fluid.

I am reminded (by an annonymous message (although I know who the message is from; how could I forget her)) of my performance at the Guggenheim in the mid 80's, I had intended to roller-skate all the way down the ramp at the gallery. Warhol was to film the event on super 8 and we intended to present a copy of the finished film to all the major galleries around the world apart from the Guggenheim itself. The purpose of the act was to create a 'fast forward' of my life and hint at my impact on modern art...

Warhol of course did not turn up! He had been pissed off with me for some time and just didn't bother. I was nabbed by security as I made my uncertain way down ( I had never roller-skated before) and unceremoniously removed from the premises. 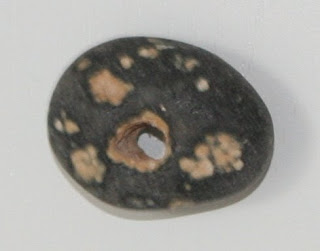 As I sat undoing the laces of my skates I was joined by a young French/Italian woman who had witnessed the whole thing. We talked about art and literature. We talked about Dylan and Springsteen. Her Name was Mona Hebuterne (Ithink I have spelled it right) and she gave me a pebble she had found on a beach in Devon; the pebble had a hole through the centre... I still have that pebble in my studio; when I need to focus on a single object or image I view it through the hole in the pebble. The pebble also reminds me of that day and of a magical woman who vanished as suddenly as she arrived.

It also reminds me my old friend Warhol.
Andy and I had had a mercurial relationship. I had met him in the sixties, he was working on his soup tins and stuff like that. I had arrived at the studio we shared to find Andy gone and a set of monochrome prints of Marilyn Monroe on the table: they looked unfinished to me so I applied bright overpaint to the prints; lips, eyelids and hair came alive... I was elated. Andy was not. We had a blazing row upon his return:
'Pop'. He said ( he always called me pop). 'I do not think that is art, pop'.
'Andy' I replied. 'One day the world will be clamouring for my 'popart'.
Well I guess Andy made a few bucks from that idea. But I'm not bitter. Andy then took to stealing my wigs and wearing them in public. He also airbrushed me from all the photographs of us in the studio... The rest isn't history.


Posted by Tristan Hazell at 10:34 AM No comments: Links to this post

Even before I could talk I would love to paint... We were poor and my mother would not spend money on paint or paper so I was obliged to beg what materials I could from the artists who regularily set up their easels alongside the canal. I suspect that by the age of six I had probably shared paint with some of the great artists of that time.

At school I was briefly instructed by Pieter Mondriaan (long before he removed an A from his name and moved to Paris). He asked us on one occasion to paint a picture that expressed our first memory...I painted this: 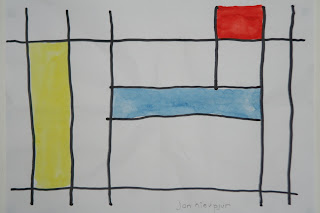 The black lines are the tram tracks my fathers bicycle wheels caught in; the yellow of course is the bicycle; the red is his blood and the blue is the water of the canal in which my father drunkenly drowned. Mr Mondriaan asked why there were no wheels or circles. I was obliged to state that I was developing a style of painting that did not rely on convential perceptions!
"You cheeky little cub" he replied. "Yes" I said, quick as a flash. "I shall call it CUBism!" Mr Mondriaan of course was greatly influenced by my early daubings and made a pretty sum from it I'm sure.
Posted by Tristan Hazell at 12:43 PM No comments: Links to this post

Milking a goat in a thunderstorm.

My mother developed eczema upon the death of my father, the doctor instructed her to avoid dairy products; not easy in our village, so she bought a goat. She called it 'Pomkin'. My job as a small boy (amongst all the other jobs) was to milk the damn thing. I loathed that goat.

In the November of my fifth year I was obliged to fetch milk for my mothers tea; a monstrous thunderstorm raged across the Low countries that night; The orchard momentarily lit by blinding flashes of lightening. Explosions of thunder would boom bronzily like Nabokov's dinner gong. Pompkin was in two minds as to which she hated most; the thunderstorm or my clumsy yanking at her dugs (the thought of those distended teats appalls me still). She chose to target me, lashing out with her hooves she landed a splendid kick to the centre of my forehead, rendering me unconscious for a short while. In falling I knocked over the milk pail and spilled my mothers precious milk, guaranteeing a beating when I returned to the house empty bucketed.

Since that day I have worn a triangular scar on my forehead and have had problems with my memory.

Posted by Tristan Hazell at 10:24 AM No comments: Links to this post

My first act on entering this world was to kill my father.

Such was his excitement upon my arrival that he departed the house on his yellow bicycle with a box of cigars in the wicker basket hung from the handlebars and headed for his favourite bar to wet the babies head. Such enthusiastic head wetting had not been seen before in our little village; even the teetotallers gathered at the window to admire the debauchery.

when the bar had been drunk dry my father set out for home on his yellow bicycle much to the amusement of his many friends. 400 meters from home the wheel of the bicycle caught in the tram track alongside the canal, my father was pitched head first onto the cobbles cracking his skull open and rendering him unconscious. He then rolled into the canal, where he was discovered the next morning, face down and most certainly dead . 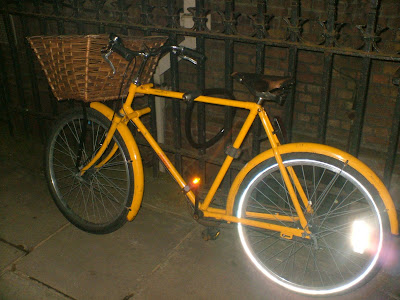 The yellow bicycle and the empty cigar box were returned to my mother by the gendarme who had been instructed to inform the widow. It was noted that the gendarme was smoking a cigar as he broke the news.

My mother naturally enough laid the blame for her husbands death squarely upon my new-born shoulders. I have carried that crime like a back pack ever since.
Posted by Tristan Hazell at 12:50 PM No comments: Links to this post

I faked my own life and then helped cover it up.