little did I know that by the end of the yesterday I would be wearing a shiny green stetson throwing disco shapes in a maroon velvet tent...

The day started innocuously enough, I had knocked off a spoon painting which pleased me greatly when nurse Caz informed me that I was to accompany her to a gallery in the West End (whenever I use the word west I think of Ruislip now) where we were to look at the work of Iranian-American painter Tala Madani; she produces politically charged humorous canvases and I paticularly enjoyed those that utilised the enema bag!

I was pleased to notice a white Ant chair in the lavatory!

At this point the day started to go pear shaped resulting in me finding myself seated at a table for eight in a velvet tent eating beef in a chocolate sauce with nurse Caz to one side and a natural redhead to the other. The redhead and I shared a passion for smoking unlike the nurse who smoulders when I spark up (she is the tinder to the camp-fire of life).

As we ate a troupe of Motley dressed South Africans performed syncronised dangling (girl on girl) and ladyboy contortionism (memories of Lingling (I'd forgotten that she is still in the cupboard under the stairs)) fat ladies sang and bearded men in dresses roller-skated between the tables. More fat ladies sang and still it wasn't over. 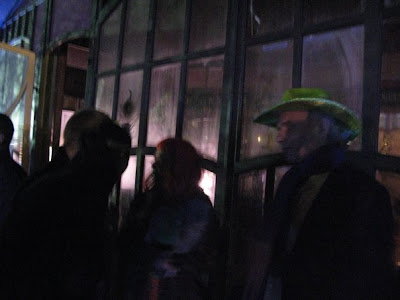 Nurse Caz gave a rebel yell; particularly liking the trousers worn by one of the male danglers and went on to inform me that he looked like a Goan hippy! Fat ladies sang again and it still wasn't over. 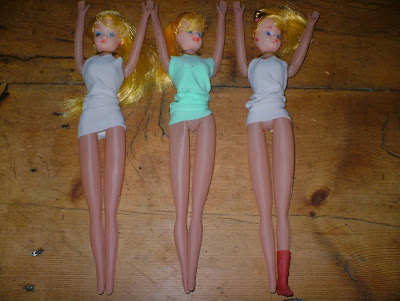 Suddenly I found myself in a lime green stetson swaying to the timeless abuse of 80's disco. Then it was over, I cannot recal if the fat lady sang again.

We all parted in the car-park under the table legs of Battersea power station.

I refuse to mention the drinking straw in the shape of a penis other than to remark: "So that's what they look like". 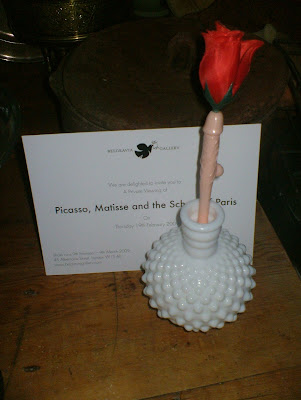 Wednesday morning found me, accompanied by a screaming hangover and Caz my new nurse, at the Annie Leibovitz exhibition at the National Portrait Gallery. On arrival there had been a pretty ugly scene as Caz had been hell bent on trundling me about in a wheel-chair. I was equally determined that I should not be treated like some kind of invalid ( a broken foot is hardly an impediment to an old infantryman such as myself) and finally got my own way.

Annies photographs never fail to move me with their blistering honesty and integrity, the images of Susan Sontag's final years were particularly touching.

Leibovitz's formal images of military chiefs however left me as unmoved as the stiff shirts photographed. I have seen the Demi Moore pregnant thing too many times to be anything other than a nodding acquaintance. The swagger portrait of Daniel Day Lewis on the other hand smacked me soundly on the forehead with a base-ball bat!

All in all it was excellent and I was almost completely distracted from the crisp white uniform of nurse Caz.

On the underground railway home I suggested we go to West Ruislip as the train we boarded was going there too (I am a great believer that tubes are like life and one must always travel as far as possible) Caz said 'probably' which was a tad too enigmatic for my hangover to stomach.
Posted by Tristan Hazell on January 30, 2009 No comments: 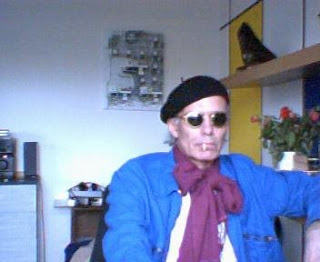 Posted by Tristan Hazell on January 23, 2009 No comments:

It breaks my heart to think of poor old Modi and the wheels I set in motion that would ultimately lead to his death.

One fine spring morning he came to visit me in my studio in Paris. Mona was with me sitting for the series of aural portraits that was to cause such uproar the following year. Mona's sister Jeanne Hebuterne was there, helping to vacuum pack the work. Jeanne and Modi hit it off immediately and were soon lost somewhere deep inside each other, they became inseparable over the next few weeks and, sensing disaster, I decided to take the love lorn artist on a trip to North Africa. 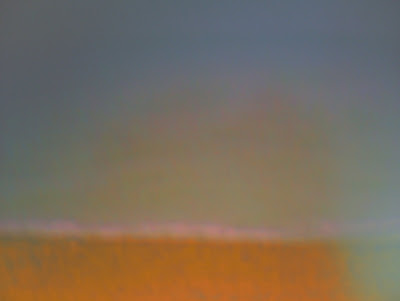 I introduced him to Paul Bowles who was living there at that time trying to write a novel (he was stuck for a title until I greeted him with: 'Good to see you so well Paul, under a sheltering sky'.) Paul gave us cups of verveine (lesbian tea he called it) and served sweetmeats from brightly coloured plates and bowls. I still have one of those bowls the glaze worn away in places from the constant rubbing of fingers scooping out the last of the couscous!

Modesty forbids me from describing the action in the brothels but needless to say the local version of Abdul el Bulbul Emir contains verses celebrating our visit. 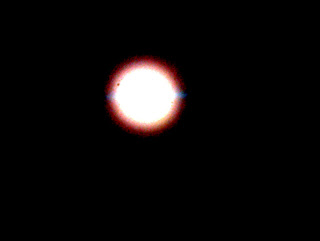 Our holiday over we returned to Paris; Modigliani to his untimely death watched over by Jeanne, I to my exhibition that was to nearly make me famous.
Posted by Tristan Hazell on January 23, 2009 No comments:

Notes written with a noisy pen.

I am not fond of the taste of Advocaat but the yellow colour (remeniscent of the bicycle that killed my father) somehow seduces me into a glass or two, especially when visiting Edvard Munch in his studio!

This time of year always reminds me of Eddie and his sense of playful humour, his love of advocaat and his beautiful muse Mona. One January (the year escapes me now; the Altzheimers is as pernicious as my mothers arthritic hip) I called in on him as he worked on a series of drawings of Mona standing on some kind of causeway, her face hideously disfigured by a deafening silent wail.

'What is this all about Eddie'. I had asked. 'Oh' he had replied 'It is ever thus these days! As you know Jan, Muses may travel backwards and forwards through time, something to do with particle physics I think. Mona has recently been in the 21st century working with some British guy who seems more butcher than artist. She returned with that look on her face and whenever I question her about it all she will say is that she has seen the 'future of Art'!... I guess it must be pretty horrible!'

'What do you think of the sketches?' he asked.

'It's a scream Edvard. But at least no-one will ever want to steal them!'

Posted by Tristan Hazell on January 21, 2009 No comments: