Yesterday while queueing (why must the British always queue, Do they not know that the war is over and there are enough muffins to go round) I impulsively bought a packet of iced rings for the fragrant nurse Caz. Quite frankly the iced rings were a dissapointment and did not generate the frenzy of excitement I had expected. 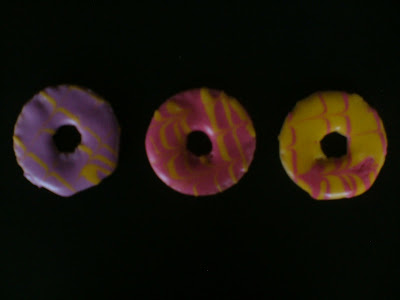 Impulsively I photographed 3 of the remaining 4 biscuits... What do you think?

Nurse Caz says that licking them hurts her tongue!

Posted by Tristan Hazell at 4:20 PM No comments: Links to this post

One summer, not long after the incident of the 'bull fight' with Pablo, I spent a few mad weeks on the Riviera on the piss with Hemingway and Fitzgerald. I had neither the drinking stamina of those literary giants nor the constant desire for fistycuffs that dogged them both like a beligerant corner-man. When the fights were upon them I would take myself to the beach for a spot of bird watching.
One afternoon I came accross Pablo posing just above the wet line, he was in the company of Dora Maar and another young woman who appeared to be dressed as an English maid. Picasso was in the blue and white Breton shirt he had stolen from my laundry basket and which, to him, had become ubiquitous.
I was pretty mad at the Spaniard at that time, he had stolen all my blue paint when he had last visited me. I suspect he wrapped the tubes and tins in the Breton shirt to hide them from the concierge.
I approached him and reproached him at the same time, teasing him about his stature and age and the youthfulness of his companions. Pulling Dora to her feet I set off with her in a merry waltz while singing (at the top of my voice) 'Little white bull'. Pablo and the other girl picked up parasols and proceeded to chase us down the beach waving them in the air all the while screaming Catalan insults. What a scene we made.
A young Scottish artist called Jack Vitterano (or similar) was on the beach with his easel. He quickly knocked off a sketch or two.
As the gendarmes led me from the scene I yelled at Picasso: "What a preposterous little man you are... You look like nothing more than a dancing butler!" 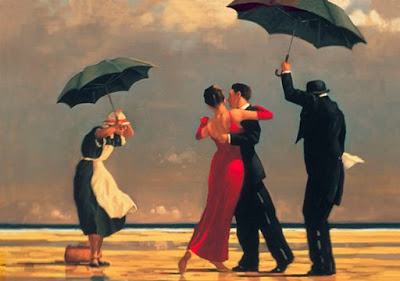 Posted by Tristan Hazell at 11:41 AM No comments: Links to this post

I am heartened to see that our traffic wardens are taking an interest in the photographic arts; this morning as I smoked an illicit cigarette at the kitchen window while nurse Caz slept dreamily in her starched white nakedness a warden spent many happy minutes making a photographic study of a car parked in the road.

I opened the window and asked him what exposure and lens he was using.

He handed me a note which read: To whom it may concern. There is no point asking me anything; I have only just arrived here in the back of a refrigerated lorry!

Posted by Tristan Hazell at 9:04 AM No comments: Links to this post

Get along little dogie and the stolen Oscar.

I see the Jolie-Pitt children have been 'running amok' in the corridors of the Dorchester while the parents were at an awards ceremony.

I met John Voight when I was the colour stylist for the trippy party light show in 'midnight Cowboy'. I had recently shot myself in the foot while drunk with a good old boy called Roland Crater and as a result limped in a pronounced way. Dustin Hoffman stole my limp for the Ratso Rizzo character which won him an oscar! That Oscar should have been mine. 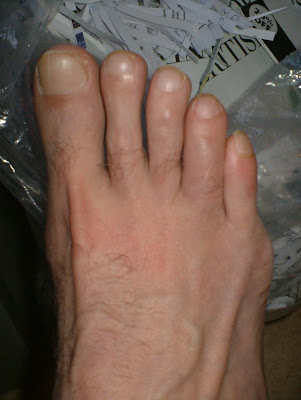 My foot after the plastic surgery to correct the two bullet wounds. The oversized 2nd toe is a result of the repair done using a rib removed from Cher. (I only have one musical bone in my body; it hums 'Gypsies, tramps and thieves' in cold weather)

I told John back then that his daughter Angelina was going to be trouble. I did not however foresee that her children would be causing mayhem in the Dorchester in 2009!

'Get along little dogie' was the song that John sang in the shower at the beginning of the film.

This morning I was woken from my fitful slumber by both the brakes of a passing bicycle squealing like a morning cockeral (did my fathers brakes on his yellow bicycle fail him that fateful night so many lifetimes ago or did they scream a warning as man and machine skittered hungrily towards the icy canal and death?) ) and the four words that I have been searching for all my life:

EVERYTHING MUST BE MEMORABLE.


Posted by Tristan Hazell at 10:18 AM No comments: Links to this post

Today I recieved a disturbing letter from my old pie baking adversary Rusty McGlint. I am shaking with horror and disbelief but will transcribe it verbatim:

Dear Jan,
London is becoming less intimidating, my social life improves daily and I no longer spend my evenings at the stage door waiting for a glimpse of Babs as she leaves with yet another handsome boy on her arm.
I have met a charming young English girl named Caz, she is a nurse presently looking after a mad Dutch Artist and writer who seems to live in a world of his own. I must say I am greatly taken by the starched white uniform (a far cry from the flour dusted gingham chaps of Lula Mae) and highly polished brogues.
For her first visit to my little home from home I made her moules mariniere: I sweated onions in my largest saucepan and then added crushed garlic and finely chopped celery. When this was cooked I added half a bottle of white wine which then came to the boil, at this point I tipped in the mussels and slammed on the lid with a dramatic Kerrang.
When the mussels had all opened (a matter of a few minutes) I removed them to a large bowl. I added some cream and chopped parsley to the cooking liquor, brought it to the boil then poured it over the mussels and served them simply with crusty bread and a bottle of sauvignon blanc. This I find is a deliciously lascivious meal and breaks down many barriers!
After we had eaten I sang Abdul el Bulbul Emir and later still she went off to pee in a bottle leaving me to think.

what to do, what to do? Is this some ghastly joke or purely coincidence. I have grown very fond of the starched beauty of Caz and would be devastated should I lose her to that uncouth rodeo-clown.

I am so distraught that I cannot concentrate on selecting my lottery numbers and fear I may be filling in the ticket with the wrong coloured pen... It is a yellow one and I am haunted by the death rattle of my fathers bicycle on those far off cobbles.

Posted by Tristan Hazell at 9:22 AM No comments: Links to this post

Inanimate humanism and the things I know about my mother.

A perfect scale model of a Paladian villa stands upon a lapis-lazuli plynth. It is Decorated in Silver and Gold leaf studded with crystals and cabochons. Finials, like giant pearls cap marbled pillasters. It sparkles. It shines. On the pediment above the central door is engraved the word HUMANA in Roman numerals.
Printed on the plynth is the legend: YOU REALLY DON'T WANT TO OPEN THIS!

When the front of the house is opened one is presented with an interior covered in photographs of man's worst attrocities to his fellow man; Images of war, the holocaust and murder!

I originally intended to fill the work with raw liver which I had bought in Droitwich but Mona stole it and fed it to her dog Retch.
Posted by Tristan Hazell at 10:54 AM No comments: Links to this post