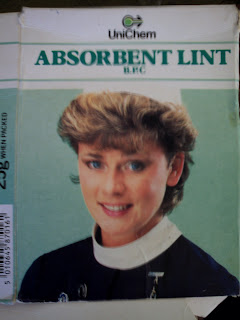 Joy, a new presence in my life, and although an amateur, an expert at putting comma's in the wrong place, is an excellent nurse with hypnotism skills par excellence and a fine turn of ankle, has agreed to tend to my immediate needs.

boy are my needs immediate.

I met her at the opening party of the International times Archive in east london, she was working the crowd as a strippergram nurse handing out packs of absorbent lint, something new to me as the only kind of lint I knew was the stuff that Babs picked from Rusty's coat as she leant in, whispered endearments and then talked of love.

I told her i was a poet, she asked what stream of conciousness was and i told her i don;t know and don;t want to know and couldn't care less then the ghost of Bukowski walked metaphorically into the room, pissed in the sink, drank all the beer... told us to fuck off.

I woke up with something resembling a hangover and a pack of absorbent lint stuck to my chest with masking tape.

as our american cousins would say: Go figure.

Posted by Tristan Hazell at 3:03 AM