But is it Art Hmmmmmm

The other night (days blur at the moment) I attended with friends a production of Oscar Wildes Salome. It was being billed (verbally) as directed by Nick Cave. Hmmmmm

It was performed in the dirt yard (no one in their right mind could call it a garden) of a Pimlico squat. 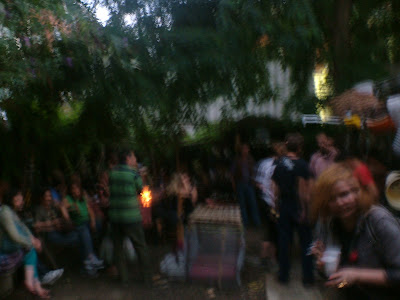 The performance was billed to start at 8.00 prompt. We sat uncomfortably drinking cheap box wine from styrofoam cups (oh how eco friendly these grubby inheritors of the world are) and waited; at first giggling at the circus unfolding and the couples trying to stick tongues down others throats (I can only assume there were tasty morsels down there, yum yum), then with impatience and finally no patience we left.

I cannot review the performance... It didn't happen. I can only cringe at the memory of the scuzziest place I've ever been. My intrepid assistant(with the courage of a young Martha Gelhorn) entered the lavatory in order to photograph it. 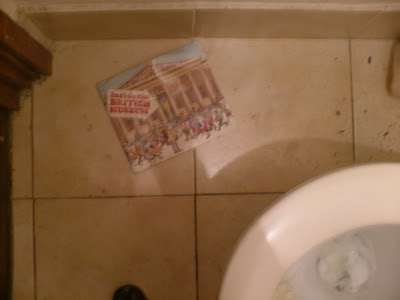 The guide to the British Museum on the lavatory floor disabused me of the notion that there was no culture here... Sadly they were wiping their arses on it.