The power of money or money bullies.

My father was a difficult man.

At times he was a good father if somewhat erratic. At other times he was a monster; a tyrant and a bully. He had few friends that I can recall. His sense of humour was invariably based on humiliation and always at the expense of another. He bullied his children because his children were the witnesses he could not get rid of. ironically his children had no idea at the time of what they were witness to... We were witnesses to his bullying for a start!

I think he was an unhappy man and a troubled man. He developed a system of transferrance to deal with his monsters; he beat me up and he beat others up (but I'm writing this so I'll stick to me. The others can fend for themselves). I could furnish a small house with the list of cudgels he used for walloping but a shoe was preferred. I learned to accept this and until I could get away I allowed it to happen. It was his THERAPY, at cubs I should have won the 'junior psychtherapists' badge with ease if only it existed. I suppose it helped form me; I'm happy enough with myself and what I am so must be grateful to him for that. at least I didn't conform and turn into a replica of the man as my brother did.

In 69 or 70 he bought a ridiculous car. It was a gold Mercedes Benz 280SE 3.5 convertible. In Banbury it stuck out like a sore thumb. I hated it; I hated sitting in it, roof down, open to the gaze of the local population, open to the scorn and jealousy of other kids (I was spat at once by a skinhead. Middle England was full of skinheads at that time). I was no longer the child who could take simple joy from sitting in one of his exotic cars. The car was an embarrasment and I was sitting smack in the middle of it and on top of that the embarrasment could be ostentatiously driven about town. 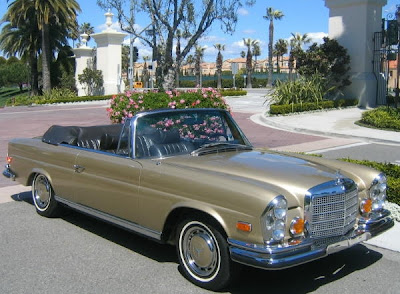 One afternoon driving through Banbury in that ghastly car, heading north on the Oxford road approaching the Cross (remember that fine lady upon a cock horse) he slowed then pulled over. He took a twenty pound note from his pocket and handing it to me said: 'Run accross the road and get me a box of matches'... There is a cigarette lighter in the car, why does he want a box of matches?

I crossed the road, entered the tabacconist's shop that stood there 40 years ago and asked for a box of matches. a box of matches which would have cost 1p at the time. I handed over the note. The shopkeeper gave me the matches, looked at the note, groaned perhaps, certainly scowled, looked at me, looked out across the road at the old man in his golden charriot. The shopkeeper handed me the twenty pound note back saying take the matches they are a gift.

I returned to the car, handed him the matches and the twenty pound note, recounting what had taken place.

He looked at me as the car accelerated away and said: 'You see Tristan. The power of money. If you only had had pennies in your pocket you would have paid for those matches'.

But power wasn't the right word was it because a bully really has no power... Just weakness and a big stick.

Oh. If I could live that moment over again I would tell the shopkeeper to keep the change.

Email ThisBlogThis!Share to TwitterShare to FacebookShare to Pinterest
Labels: Biography

This sparks another memory. More a continuation than a mere passing. Even Richard Dawkin’s postulations on the Selfish Gene failed to furnish the true facts of the functions of primogeniture. There are many recorded sightings of another bastard cruising around in a variety of old Mercedes Benz. In the 1990s it was old 123 series Mercs that attracted the selfish gene; a saloon was traded for an estate and afterwards there was an evolutionary hiatus. Currently a left-hand drive version of a more modern but nonetheless old Merc is parked on a French drive way. Its attraction is its load lugging capacity. The old baggage that it has to contain has an attenuated past but, as yet, it has not been used in a parade of childhood humiliation. Nor is this simply because the sun roof failed to function several years ago. Inside, the occupants look out on a world of ghosts and gilded prisons.