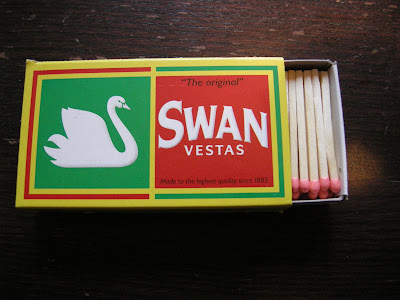 One has not lived until one has seen ones father self combust.

My own particular rite of passage of this variety occured in a Newmarket toyshop when I was 11 years old. My father and I often frequented toyshops then but then again they were more than simple toyshops; we were model aircraft enthusiasts, we were not after toys but the makings of our machines and these shops were the source of our balsa wood, our glow-plug fuel, our tissue and dope that smelled of pear drops, our balsa adhesive (which my father also used to staunch the blood on his often lacerated hands, I still use glue to this day to seal small cuts on my hands) which had its own addictive smell... strange my memory of childhood hobbies is a series of smells more than anything else.

We were browsing as only men (separated from the womanfolk) can browse. There is nothing frivolous about model shop browsing, it is imbued with earnest endeavour and a purpose not extant in any other kind of shop (unless you a a car nut in which case Halfords might inspire similarly). To aid my fathers browsing he sucked upon his pipe. His pipe that could be relied upon to do one thing; that one thing was to go out often, caused perhaps by the greasy black shag he incinerated within it. He relit his pipe frequently (like all fires, pipes are most enjoyed during the lighting process, the arsonist becomes passive thereafter while the fire goes on ahead without assistance. He relit his pipe often with a Swan Vesta from a yellow box decorated in green and red  with not only the name but also a fine looking swan emblazened on it (although I never did understand what a swan had to do with starting fires, perhaps it was biblical; I didn't listen in R.E). Being a tidy man my father would return the used matches to the box and the box to his pocket.

On that illumminating day (did I also discover the pun at that moment?) My father lit his pipe, then, distracted by the cornucopia of model making paraphenalia about us, he returned the match to the box before it was properly extinguished. He returned the box to his cavalry twill trouser pocket, sucked hard on the briar with a contented gurgle as the contents of the match box in his pocket exploded.

He was sensible enough not to try to put his hand in to retrieve the incendiary device so was reduced to dancing around that toy shop flapping at his smoking groin with glue spattered hands much to the delight of his son and the disapproval of  an assembled audience of hobbyists and shopkeeper. If I were an overly imaginitive boy back then I would have said that the glue on his hands caught fire... But it didn't.

He eventually put out the fire, removed the match box, slid it open to show me the serried ranks of now welded together matches, blackened and acridly smoking (another smell to add to my collection).I cannot remember if the subject was ever raised again, I'm fairly sure I recounted the drama to my mother and siblings on returning home. I cannot remember if my father laughed. I hope he did, I really hope he laughed. From that day on he used only safety matches and always ensured that his used matches were placed sardine-like back in the box, the hot ends safely away from the unlit ones.

Posted by Tristan Hazell at 4:13 PM

Email ThisBlogThis!Share to TwitterShare to FacebookShare to Pinterest
Labels: Biography