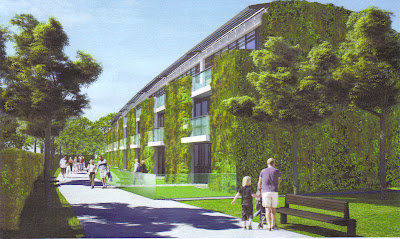 Earlier this month a scheme to develop a shitty little patch of Portobello Road was unveiled.

It concerns the patch of land that lies between the once infamous Cafe Ravenous at number 275 and the railway line. At present there exists a brick wall topped with security fencing capped with prison like spikes; an eyesore.

The proposal includes the creation of  10 new mews houses tucked away behind 2 new shops fronting onto the street. The Portobello facade is in total keeping with what already exists; there is no attempt at 'flashy' Purist arseing about, no Minimalist overkill and no threat. It simply places what should have always been there.

the Mews development is a different story; thoughtful, sensitive, modern, Eco-friendly and unobtrusive, utilising a strip of waste land.

The Architects, CHASSAY+LAST know Notting Hill well and it shows. The principals behind the scheme are locals. This is not a sharp suited 'smash and grab' raid on the neighbourhood by city developers. It does not herald an 'All Saints' type intrusion.

There will be some moaning minnies and detractors but the truth is that this little strip of Portobello needs sorting. K&C are throwing a shedload of money at the underused square opposite in an attempt to 'bring it up'. this proposal does nothing but add to the area.

You can say that it "isn't" as many things as you like, but it is. Where's the affordable housing the area so desperately needs? What exactly does this bring to W10/11 other than more rich people who don't spend their money locally?
I give it a strong 'thumbs-down'.
BTW - I've known about these plans for months. Not exactly breaking news, just more breaking up of the area. They'll be trying to work out how to get rid of all the nasty coloureds soon...

yes i agree..... just another property developer who aint gonna bring nothing good to the area.... except more rich snobs! cheers guys! what happened to the community!

I am pleased with the plans from an architectural perspective. The proposal is low density and sensitive to the surroundings. Reinstating the shops seems like an excellent idea, as long as the new businesses are sensitively selected and not simply boutiques. But I too am concerned that this is basically a private development. I am especially concerned that the mews may be gated. (Apparently the police feel it would be safer that way.) Gated communities are, in my opinion, a disaster for social interaction and cohesion. All we will see is a glimpse of the mews through metal gates. The development also seems a missed opportunity as it should continue all the way along the railway embankment to Ladbroke Grove station. (There was an earlier proposal to do this so it is totally feasible.) This would then open up a walkway from the station to Portobello Road, genuinely enhancing the area for the local community.