Charlie Simpson at the Tabernacle. 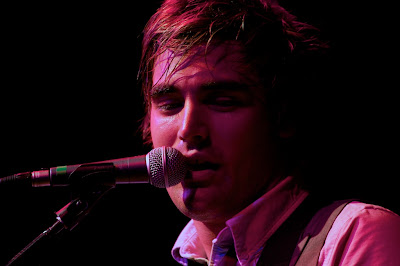 I knew I was the wrong person to review Charlie's show at the Tabernacle last week. fortunately I got chatting to some fans in the bar afterwards... They put me straight in no uncertain terms. I asked one of them; a Portuguese girl named Teresa Teles to write a review for the blog.  Here it is:
Teresa Teles writes:
Last Tuesday Charlie Simpson performed for the first time as a solo artist. This date sold out approximately three weeks in advance and, as expected, Charlie was anxious as he tweeted: 'Show day nerves starting to kick in! Very excited though.'
As 6 o'clock approached the fans started to gather around the building, eager for the doors to open. It has been said that this was the most popular event the Tabernacle has ever held.
At around 7.40 pm the supporting act, The Xcerts, opened the concert. The band cheered up the punters with a few acoustic numbers as they waited for the big man to show up. Twenty minutes later Charlie Simpson joined the stage and was received by a happy and cheering crowd. Thorns was the opening song. The more devoted fans had already had the chance to hear this song almost a year ago.
The crowd was enthusiastic and so was Charlie. At the end of Thorns, we could see how happy he was. His public  liked what he was doing. This was not a common show – most of the songs performed have not yet been released. (Young Pilgrim will be soon.) So the people were given new melodies. And they liked it. Once could say that the most appreciated moment was when Charlie performed his 'so played on radio and TV shows' new single Down Down Down. A great moment. But again the crowd the was amazed by another Simpson song: one he said he had written a couple of days before – Please Let Me Go. Magic was done. Charlie was on his own on the stage with his guitar playing this touching and beautiful song. I was told some people even shed tears. 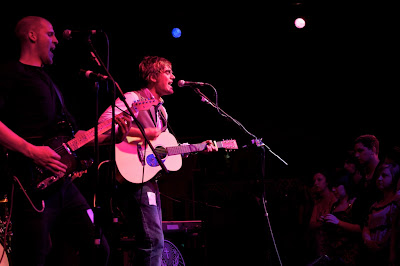 After a few more songs, there was no place for doubt – Charlie Simpson is going to become big as a solo artist and even Fightstar fans are enjoying this project.
The show closed with The Farmer and his Gun, a more cheery number.
Peel your eyes and hearts because this man is going to hit the charts.
The play list was as follows:
Thorns
Cemetery Gates
Down Down Down
Sun Down
Hold On
Need a Friend
Parachutes
If I hide
Please Let me Go
All at Once
Farmer and his Gun
Get Down Down Down from Itunes here:http://itunes.apple.com/gb/album/down-down-down-single/id431245239