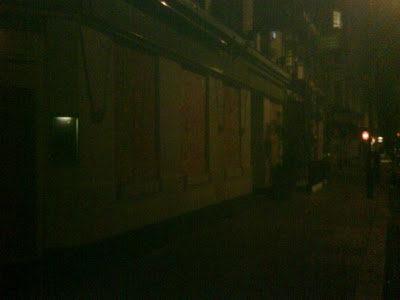 This is local Restaurant Bumpkin in Westbourne Park Road W11. Boarded up and closed after Sunday night's looting spree. The whole area was boarded up and closed last night. Police everywhere and fortunately no sign of the gangs of looters that we saw the previous night.

The Cow was thankfully open for a while where I met up with Gaz Mayall, Ray Roughler Jones and others to drink a beer or two and try to get on with life. The Cow closed early, I went for a walk about with a friend, found the Cock and Bottle open; another pleasant surprise.

The atmosphere here had been tense all day. Surreal.

I'm not going to say much more on the matter other than it occurs to me that parents have lost control of their children and need to clamp down and where are the community elders right now? Who is talking to the kids.

We are going to be battened down again this evening with a massive police presence.

UPDATE: Wednesday night was quiet but spooky, a big police presence on the streets and gangs of youths hanging out. A couple of strange faces appeared to be moving from group to group. Nothing kicked off. Curious to find that I am being treated as the enemy by some because I talk to the police about the situation. A raddled over the hill 'rock chick wannabe' had a go at me for talking to the "filth". What is wrong with some people. It is our home that is being threatened by these thugs. We need a Police presence.

good to see that the Castle and Portobello Lounge were open last night with some live music.
Posted by Tristan Hazell on August 10, 2011