Sirens but no mermaids. 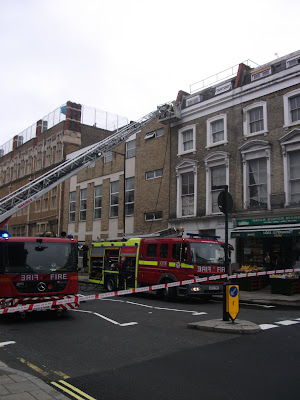 Dreaming of sirens I awoke to find next door on fire. Fire engines do not resemble mermaids.

Not a poem but the surreal start to my day; dozing and dreaming I was brought round by the sound of many sirens and they did not pass the house. I thought 'Strange, A bit early for the looters. Surely they are still asleep or playing grand theft auto on their stolen consoles'. I went up to the roof and saw that I was surrounded by fire engines and smoke coming out of the school next door.

downstairs I opened the front door to the fire brigade who asked me to leave immediately.

I took my false tooth and stetson. I should have put some socks on, That was a mistake, not putting socks on.

now, later, the fire is out, my flat is smoky and greyish like someone has been burning car tyres in there. I have to keep out for a day or two until the smell has cleared but it could have been far worse.

It was caused by builders working on the roof earlier this week, had been smoldering for a while. I had been very lucky that it did not go off at 1.00 am when no-one would have seen the smoke.

Fire brigade were great. They had to take some of the school roof off to get water into the fire. "Most of it came out through the school" said a fireman. Some of it didn't!
Posted by Tristan Hazell on August 11, 2011