From the Archives. Self portrait. 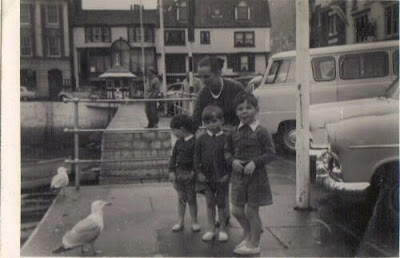 The middle child.
As a young child I was given my own set of plastic tableware: plate bowl and beaker. these objects were yellow! I did not chose the colour yellow, I was told that the yellow ones were mine. From then onwards I would frequently be given yellow things; toys, clothes and the like. These objects were accompanied by the statement that yellow was my favourite colour, that had I the choice I would have opted for the yellow.

Yellow was not not my favourite colour. I would be hard pressed to name a favourite; I was never given the opportunity nor the luxury! I have a feeling that the colour was assigned to me in some kind of attempt to introduce a little brightness into an already dark and troubled child.

Even now, years later, if I am asked what my favourite colour is I am instinctively drawn to the word yellow... not to the colour but the word, as if yellow means favourite.

twenty years ago I made a picture of my childhood; It said everything I wanted or needed to say. It was both a portrait and a summary.
It consisted of a glazed, shallow wooden box. the box was lined with silver leaf upon which were placed a black and white image of myself aged three alongside a yellow plastic spoon (which I had taken from the Hayward gallery cafe; the artistic integrity of the object was important). The outside of the box was wrapped in mattress ticking to emphasise the comfortable environment that I appeared to inhabit. Unseen to the observer the back of the box was covered with an image of a mass of writhing snakes.

The choice of the plastic spoon was important in that accurately represented MY own self-regard; It was a valueless disposable item, even the colour was chosen on my behalf yet within its context it is transformed into something lyrical and poetic in its use of metaphor!
Something of no value is suddenly imbued with emotional importance. It has something to say. the rest of the symbolism is hackneyed and obvious but no less important for that.

This image was the first of a series of portraits using plastic cutlery of various colours, all taken from art galleries to ensure the Artistic integrity, culminating in a self portrait as a black plastic spoon. This consisted of nothing more than the spoon (from Tate Modern) mounted on a stark white wall! Again the cheapness and ephemeral nature of the object was central to the work. The black is self explanatory and its placement: Unbounded, in a vast white nothingness emphasised the lonliness and insularity of the depressions I had been subjected to from an early age. I laughingly refer to this work as Abstract Depressionism.

To me something miraculous happens: An object of no worth becomes invaluable in its ability to convey the lonliness and despair of depression. It appears to speak from experience.
Posted by Tristan Hazell on September 17, 2011