Marques Toliver at the Tabernacle.

Some reviews are a joy to write. Some performers defy the laws of probability. Sometimes the Tabernacle buzzes. sometimes all these things collide to create a memorable event.
The Art Explosion opening, attended by the Mayor, in the Gallery combined with a late start to the sell out show in the auditorium ensured that the place was rammed. There had been a lot of buzz about this one. time out had made it one of their picks for theweek and tickets had sold out in advance.
Mr Toliver is impossible to categorize; a classically trained violinist with bucket loads of sass and showmanship who also happens to write and sing a kind of soul. Backed by a happy band comprising a string quartet, drums, a couple of keyboards and a pair of backing singers he produce something pretty cool and totally unexpected. He produced an auto harp for one number, referencing P.J. Harvey as he introduced the instrument. Rock n Roll. 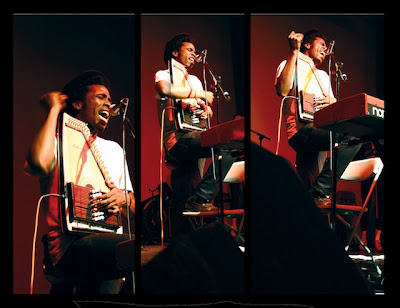 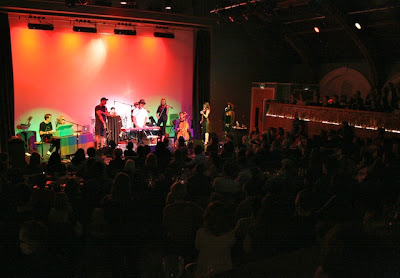 Photographs: Thomas Pegoraro.
I noticed a number of music industry bods in the audience; an indication that this man is hot!
A great show, a great night at the Tabernacle and a joy to write about.
Posted by Tristan Hazell on September 14, 2011