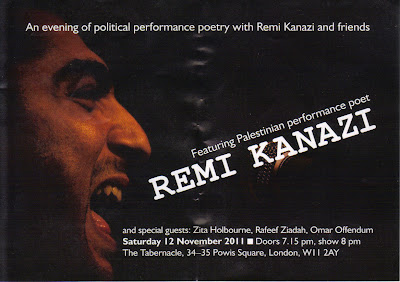 Remi Kanazi's UK tour kicks off with a fundraising event at the Tabernacle W11 on November 12th.

REMI KANAZI  Palestinian-American Performance poet, writer, and activist based in New York City, he is the editor of Poets For Palestine and the author of Poetic Injustice: Writings on Resistance and Palestine.  His political commentary has been featured by news outlets throughout the world and his poetry has taken him across North America and the Middle East.  He recently appeared in the Palestine Festival of Literature as well as Poetry International.  He is a recurring writer in residence and advisory board member for the Palestine Writing Workshop.  www.poeticinjustice.net.
RAFEEF ZIADAH is a Canadian-Palestinian spoken word artist and activist.  Her debut CD Hadeel is dedicated to Palestinian youth, who still fly kites in the face of F16 bombers, who still remember the names if their villages in Palestine and still hear the sound of Hadeel (cooing of doves) over Gaza. www.rafeefziadah.ca.
OMAR OFFENDUM is a Syrian-American Hip hop artist, author and producer- born in the KSA, raised in the USA, and repeatedly hassled by the TSA.  His solo release in 2010 was affectionately dubbed "SyrianamericanA". www.offendum.com.
ZITA HOLBOURNE is a poet, artist and activist.  Former member of Brothaman Poetry Collective she campaigns for equality, freedom, justice, and democracy through activism, art and poetry. www.myspace.com/zitaholbourne.
Ticket details HERE
Posted by Tristan Hazell on October 29, 2011