I got home after the horrors of the Castle Portobello Road, its cockroaches, juvenile management and gastronomic delusions to find a bunch of drunken kids wreaking havoc under the westway.  Of course these poor kids have nothing better to do in the evening other than wreak havoc. Mummy and daddy, skanked out on crack, booze and ganja have no idea how to bring up their kids and the last place they want their kids is at home interfering with their booze, crack and ganja so they kick them out into the streets to grow up and perhaps get a life.

Less reason to vote for the conservatives I think.... Cameron! Keep your kids at home.
Posted by Tristan Hazell on March 31, 2012 No comments:

The Castle on Portobello Road, cockroaches and mismanagement.

I called in at the 'newly refurbished' Castle on Portobello; you know, the troubled pub without a hope in hell save a place to buy drugs and steal handbags. A friend was playing there, you know the Castle is pretending to be a music pub. Jesus wept!

I bought myself a beer, listened to some extraordinary Bill Withers cover while I watched cockroaches cross the floor. Big cockroaches. Massive fuckers.

I asked the barmaid (probable age 15) where was the landlord, she said dunno. I asked who was the manager, she pointed me at a boy who had been sitting the customer side of the bar all night chatting up plain girls and playing with his hair. I approached him, pointed out the cockroach situation whereupon he informed me that, and I quote: 'This is Portobello Road mate'.

He was absolutely right. It is Portobello road and we expect better than that from a scuzzy pub masquerading as a gastro pub charging a fortune for overpriced average food cooked and served in a place riddled with vermin and managed by a kid more interested in anything other than his job.

I will talk to the principals involved in the Castle and ask why they think that what they are providing is anything other than shoddy. Portobello Road is screaming out for some good quality, reasonably priced food.

We do not need cockroach infested, badly managed shitholes.... If we wanted that we would have kept the old Castle as it was;
Posted by Tristan Hazell on March 31, 2012 1 comment:

The Welsh beat the Irish on St Patricks day. And the Cow, westbourne Park Road, shows its true colours.

I spent Saturday having the best of days with people I love, watching Wales win the 6 nations and eating a butter bean. Mr Pounce was in red as befitting his Welsh roots and the muse knew all the words to the songs.

Wales won. We had a drink and watched small boys with light sabers duelling as the sun set.

Then to the Cow... Of course it was St Patricks day and the Cow is an Irish pub... Is it fuck.

The cow is as Irish as Tokyo and it pisses me off to see people who have booked a table to eat being charged £5 on the door to go in because it is St Patricks night.... why weren't the customers warned that they would be charged on the door. The food is good at the Cow but already way over priced and it's not as if they have a celebrity chef.

The landlord is rarely there.

I have never know an Irish staff member there, unless Albania is suddenly Irish, not to knock Albanians but they ain't Irish.

Diners were charged at the door to eat at a table they had booked.

The owner wasn't there to explain why this was the case.

Gaz Mayall was there with his band which made the whole thing magical. Without him, Roger Pomphrey and a couple of others it would have been SHIT.

The Cow suffers now from the malaise frequent in other 'destination' pubs/bars in that they don't give a shit if you don't like it because thousands of others are there to be suckered.

If not suckered then happy to pay a premium in order to feel that they are part of the Notting Hill trustafarian, coke driven 'better than you' never really worked in my life mentality.

Oh. And what did the door charge pay for? It payed for the bouncers!
Posted by Tristan Hazell on March 20, 2012 No comments:

High Street Credit.co.uk & Rewards.co.uk are a bunch of lowlife scammers.

One way of looking at the danger of gum.

Jan called round today for a glass or two. there was a pack of gum on the desk, not my gum I hasten to add but gum left by a visiting Legionella tester (don't ask, long story).

Jan said: 'I bullied my kids, and in order to bamboozle them about drugs n stuff. I told them they could do anything but chew gum, gum was out of bounds, beyond the pale, gum was, let's face it, infra dig. do smack I said, do booze, smoke 80 Kapstan full strength a day I said. But do not do gum I said.  My theory was that they would eschew the drugs of my choice and go for the one I abhorred. I believed that they would chew gum above any other vice to poo poo me.'

Did it work I asked Jan.

'No'. He said. 'One of my sons is an alcoholic, another a junkie and the third is dying of emphysemia.'

'At least'. I said. 'none of them died choking on chewing gum'.

'No'. He said, and then went on: 'But if a child is going to predecease a parent the child should have the good sense to get it over and done with quick. Parents spend most of their lives worrying about their children's ability to live unparented instead of enjoying drugs and stuff like that:.
Posted by Tristan Hazell on March 12, 2012 No comments:

Architectural eyesore and everything that is wrong with modernism on Westbourne Park Road.


As usual Jan's views are not necessarily mine


It has been there for a while. you must have seen it; the piece of 'modern' architecture on the corner of Basing Street and Westbourne Park Road.

As the founding father of 'Nieupurism' I am horrified by this upended shoebox with applied faux Puginesque perpendicular wooden bits; a cross between a Morris Traveller and a 40's mock tudor semi in Harrow without an original idea or a spark of excitement.


The build quality too is risible; We have no contractors in this country that can handle modernism due to our ridiculous planning bullies and our collective refusal to embrace anything other than period pastiche. There is already damage to the flimsy, thin set lower walls and it can only deteriorate.

As I started to photograph the building a crow perched on the CCTV camera on the corner cawed loudly, crapped then flew off; a sure indication of Le Corbusiers feelings about this carbuncle. Ed's note: This is a pretentious in joke and play on corb's (the crow) nickname.


In terms of fitting in with the environment, physical, social and economical, the beautifully graffiti adorned wasteland corner was always going to be impossible to beat. 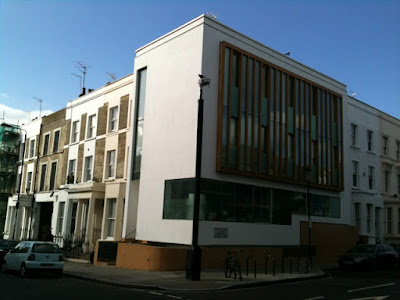 On a final, sad note I see that the occupiers of the building have decided to eschew the minimalist ideals and fill the windows with  swags and tails and clutter. It is an eyesore at best. It looks like a derelict charity shop. 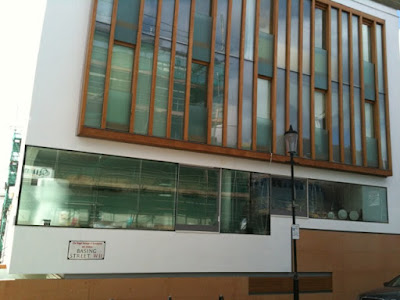 A pint for the inner woman on World women's Day. 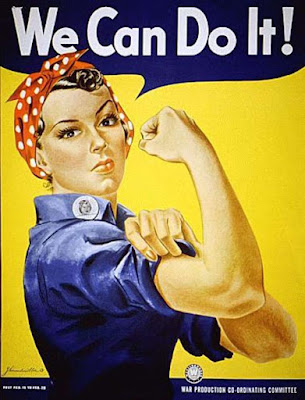 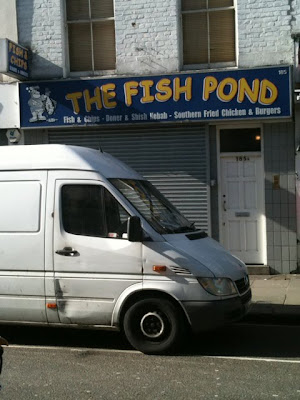 It wasn't the best chip shop in the world but it was useful, which cannot be said about yet another 'emperor's new clothes shop' that will more than likely replace it!  Rumours abound about what exactly is going to happen in this stretch of the road, especially the Poundshop site. there is talk of a major high street clothing store moving in. The name 'Urban Outfitters' has been bandied about.
Another nail in the coffin then.
Posted by Tristan Hazell on March 08, 2012 No comments:

I'm Bound To Pack It Up.


An avante-garde version of the original White Stripes song. Track #2 on the album Aluminium released in 2006.
Posted by Tristan Hazell on March 08, 2012 No comments: 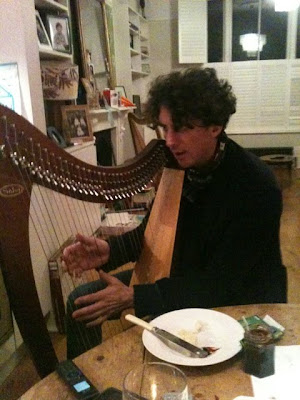 A very rare photograph of the poet Murray Lachlan Young warming up for St David's Day with harp.
Posted by Tristan Hazell on March 02, 2012 No comments: 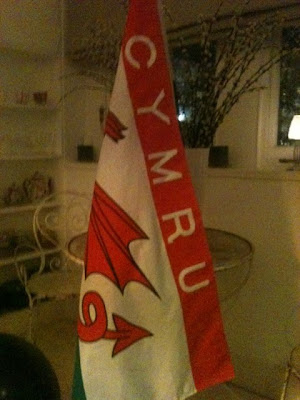 Mr Pounce the Barrister put on a slap up leg of lamb yesterday to celebrate the patron saint of Wales (the United Kingdom's only home grown saint). The Fragrant Wilhelmina was of course present as was a flag, daffodils, welsh cakes hand made by the Princess of muses and great cheer.
Posted by Tristan Hazell on March 02, 2012 No comments:

This morning I noticed that 'Tesco Disco', the Balkan drinking den on Portobello was being ripped apart.

Tesco Disco was where you went when everything else was closed and a drink was essential. It was an edgy place at times.

Sad to see another piece of Portobello go. 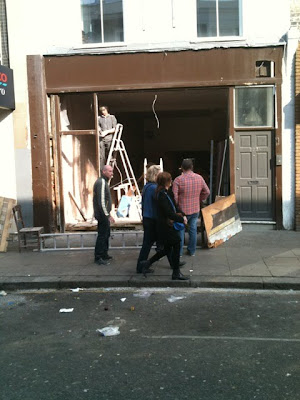 Apparently it is going to become an Italian Restaurant, hopefully not another pizza place.

Well what do you know! It is another pizza place but a good one! Review of sorts HERE
Posted by Tristan Hazell on March 01, 2012 No comments: