Bianca Jagger 'assaulted' at the opera. 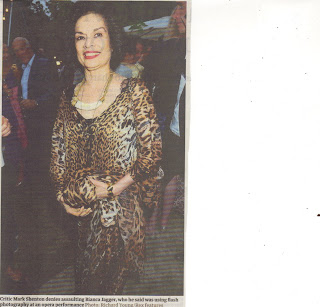 I nicked this photo from the guardian, if you squint hard you can make out the photo-credit in the text at the bottom.

Bianca Jagger was at the Barbican for a performance of Phillip Glass's bonkers five hour, abstract opera Einstein on the Beach. She took a couple of photographs during the curtain call which apparently pissed off some bloke called Mark Shenton (Sunday Express theatre critic) who then proceeded to cause a scene during which, according to Bianca, he assaulted her. Shame on him.

In the first place Ms Jagger (who not only had to put up with being married to the pop crooner Mick but also has worked tirelessly for human rights) should be allowed to do as she pleases, especially at the opera. Secondly, this Shenton character would probably have applauded her had she been photographing him for her scrap book of theatre 'greats'. He obviously was affected by the roar of the grease paint, the smell of the crowd and the heady  essence of modern opera, which to my way of thinking is probably a bit too rich for the likes of him and his down market rag.

Shenton is quoted in the guardian as saying: "There are clearly no rules anymore. There is clearly civil breakdown in the theatre."... For fuck's sake man! Lighten up. It's modern innit!

To my mind there is clearly a mental breakdown in that particular theatre.
Posted by Tristan Hazell on May 09, 2012