Once upon a time
he wrote on pristine A4
but we would filch fold launch his words
into the surrounding Bermuda triangles
now he writes on paper tablecloths
of the poem and the paper plane
a perfect marriage of art and science
capable of unpowered flight.

And how as a child
copying copperplate Keats nightingale
launch it from Hampstead Heath
watch it rising on its innate thermal...
And how
Thomas Stearns Eliot
would fold his own complicated words
send them skyward
singing
to lodge behind radiators, sofas and atop high wardrobes
that furnished his horizon.
Unreadable from here.
Posted by Tristan Hazell on November 18, 2012 No comments:

Afternoon drinks at the Tabernacle with the muse, Mr Pounce, the Concierge and various dogs and children, the excuse for all of this was youngest child learning Brazilian dance fighty thing in the studio upstairs leaving grown ups to drink hot toddies and beer with impunity downstairs!

I got to say hello to a diverse number of people who I wouldn't expect to meet in the same place at the same time.

Yay! the naff gift shop has gone and with it has gone the ghetto feeling that previously existed which made I and I very uncomfortable about being white in our 'multicultural arts venue' ting!

The gallery has a very good photograph exhibition on, including a wonderful image of Gil Scott Heron, in the long space beside the bar is an exhibition of painting that actually worth seeing  which creeps up the stairs to the main space and should set a precedent in my eyes.

Chris Scholey is still there generally managing and managing generally well to cope with the demons that infest the Tabernacle.

I bumped into the producer of this years panto who informed me that, for the first time in years, the panto is not looking back and resting on laurels but is going forward, going to be a twist on Oliver (if you will excuse the pun) and going to be new!  Old boring stuff... IT's BEHIND US!

There is some good stuff going on in the tabernacle. I don't think it has got itself  into the whole community the right way yet but is improving and quite frankly in the light of it's past as that place between a rock and a hard place is making the right kind of effort.


We left with the oldest boy asking if we could go back for dinner there some time.

I don't see why not!

Posted by Tristan Hazell on November 15, 2012 No comments: 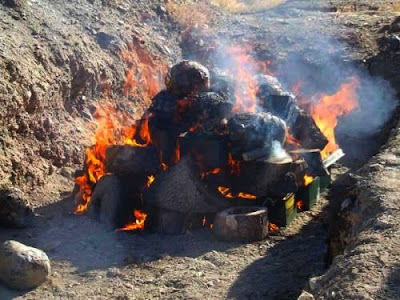 In various parts of Asia British troops are burning fields of poppies. They have their reasons for doing this and no-one here seems to mind. During this process British troops are being killed by people who amongst other things do not like their poppies and their income being torched. We honour these dead soldiers each November by wearing poppies... A tradition started after the first War when poppies, Flanders was full of them, were considered to symbolise the wasted generation of men sent to their stupid death by a bunch of idiots who did not value their lives and considered them nothing more than targets.

In Kent yesterday an idiot 19 year old was arrested and held in custody for publishing a photograph of a burning poppy.

The wrong kind of poppy!

How very very stupid has this country become! 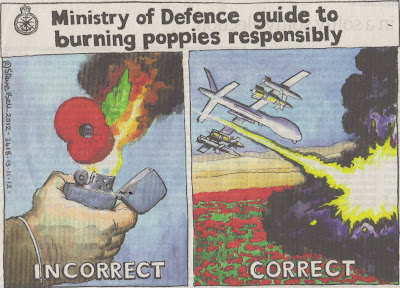 An open letter to Jonathan/David Dimbleby from Jan Nieupjur. 'Paedophiles within the BBC'.

The media cannot seem to make it's mind up as to which of the Dimbleby's they are talking about. Maybe it is both!


Jonathan Dimbleby has accused the BBC's critics of showing "disturbing relish" in their attacks on the corporation over the Jimmy Savile abuse scandal, as new allegations were made against another former BBC star.

The Radio 4 presenter said there has been a witch-hunt since allegations emerged that the late TV star abused hundreds of young girls and women, some on BBC premises. 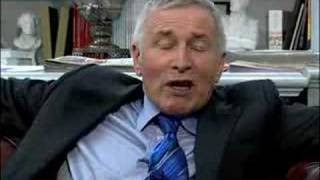 In an interview with the Times, Dimbleby said: "I think it's disgraceful and horribly out of proportion to hound everyone at the BBC in a way that is unwarranted and lacks perspective when the real focus should be on what Savile did wrong.

"Paedophilia is a huge national problem that no one thought about 50 years ago and is now something that concerns everyone, but this has become a witch-hunt against the BBC."

Oh come on Jonathan, this is not just about Savile!  Yes Peadophilia was thought a huge problem about 50 years ago. Quite a lot of the thinking was done by paedophiles having problems finding victims, until the BBC came along with it's cheesy 'pop' programmes aimed at children clamouring for a badge or a medal or their 15 minutes of TV fame and were therefore the perfect prey to the perverted sharks trawling those waters guided and protected by the production pilot fish who obviously did know what was going on!

All along 'Auntie Beeb' was supposedly chaperoning those children. Hmmm, Fagin running an orphanage!

Dimbleby goes on to say:

"Blaming the media and politicians for getting their priorities wrong, Dimbleby said: "Organisations that have come under flak recently such as newspapers and MPs want to get their revenge. They think the BBC is too smug and holier-than-thou. But there is a disturbing relish in the way the critics have laid into the BBC, holding today's office-holders to account for what happened 30 years ago."

You are part of the media, you hang out with politicians and the BBC is smug and holier than thou and as sure as eggs is eggs todays office holders within the corporation most likely knew what went on and turned a blind eye.

One wonders how you, Jonathan would feel about it had one of your children been sexually abused within the hallowed halls of the BBC.
Posted by Tristan Hazell on November 03, 2012 No comments: