The Pop up Cinema on Portobello road is a wonderful, slightly scuzzy little cinema underneath the Westway. It's not a flea pit (fleas cannot afford the area these days) but it ain't the Electric either. Best of all it is free!

Last night saw the screening of the films entered into the film competition (the prizes are bronze trellik towers) and the awards ceremony.

The films as ever were collectively something of a curates egg, some of them not new but there was enough of interest to brave the pissing rain and it was good to see some old faces. I'm not going to bang on about all the films, I'm sure someone else will do that elsewhere, but I will mention two of them: Spencer Hudson's film,'Circles', which won the Local Films category is a delightful, well made and, as often is not the case in such things, well edited short which is well worth a look. The link to the web site is HERE


The second film of note won the comedy treelike: Voodoo Moustache again was very well made and full of nice touches. Very stylish indeed, beautifully designed and if nothing else should put its creators well on the road to pop videos! Made by students at the National Film and Television School I believe. 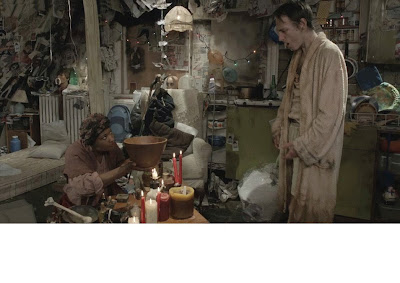 Posted by Tristan Hazell at 2:57 PM