The Ace of Spades. an homage to Lemmy.

Posted by Tristan Hazell at 10:30 AM No comments: Links to this post 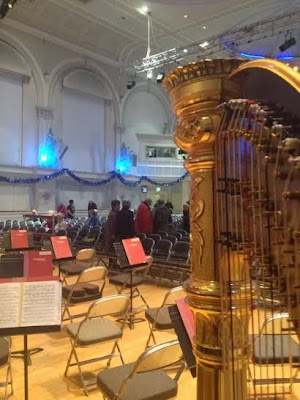 Posted by Tristan Hazell at 7:16 PM No comments: Links to this post 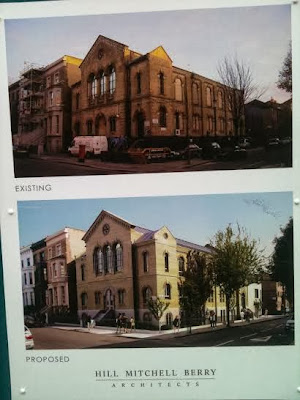 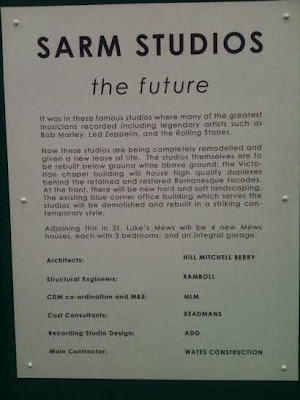 It was bound to happen. The gentrification of Notting Hill/Ladbroke Grove continues apace and another landmark is turned into fat cat housing. I love the use of the term 'Duplex', a ghastly Americanism meaning 'Maisonette'.

Posted by Tristan Hazell at 1:20 PM No comments: Links to this post 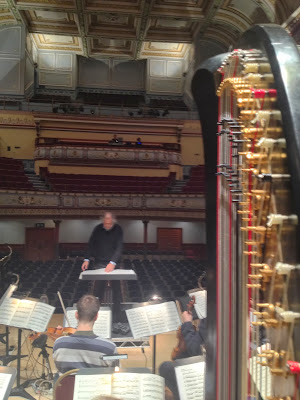 Posted by Tristan Hazell at 3:57 PM No comments: Links to this post 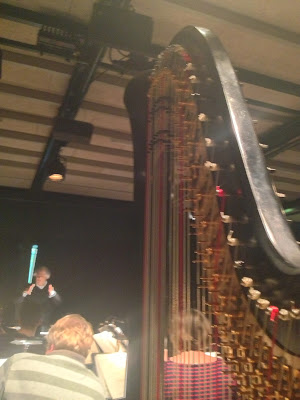 I like this harp, it is black and without embellishment or adornment. It is a harp that doesn't harp on about itself.

It is a Lyon and Healy number 30. Simple and elegant.

Posted by Tristan Hazell at 8:42 PM No comments: Links to this post

I've often said that the Elgin on Ladbroke Grove is the best music pub in West London which of course it is. On monthly wednesday nights Tom Moriarty runs his 'Driftwood Sessions'. Tonight I put the baby in the sink for safe keeping, kissed the muse then wandered down. 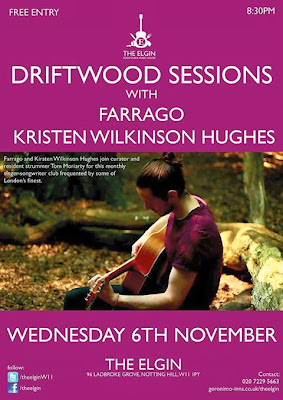 Kris wilkinson Hughes was playing… Yeah neither had I.  I have now!

It is pure joy to witness such virtuoso song writing and the performance of said songs by… Well by… People doing it as right as you can get. Kris Wilkinson and Joe Hughes, without any pomp or circumstance, without any flash young bling thing, just did it, made my day.

I don't understand music and for that reason do not go into intricate reviews. I do however understand emotion and tonight dear reader I wept. Kris and joe did a song called: No More I Love You's'. A cover of an Annie Lennox song I hear you say. Far from it, Joe wrote it and the two of them tonight imparted something that Ms Lennox never did.

A truly enchanting chance encounter… but not really.

Tom puts on a well worth attending night with his Driftwood thing.

The band that followed was called Farrago. I had time to listen to the first two numbers wondering whether this was jazz or blues or what. The band leader has a voice that makes you want to think about it. I wish I had more time.  I'm going to listen more to their stuff.

I had to leave early to ensure that the baby was not thrown out with the bath water but bumped into Joseph Dean Osgood on my way out. Joseph is at the Chelsea potter tomorrow night. Check him out.

Oh! The Elgin is free, the beer is reasonably priced and it is very civilised.
Posted by Tristan Hazell at 11:27 PM No comments: Links to this post

Russel Brand demonstrates that he really is Jesus in Parliament Square. Bonfire of his own vanity. 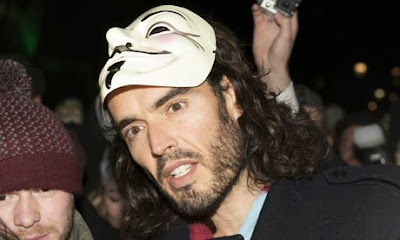 Russel Brand staged a demonstration in Parliament Square last night in order to vent his anger at the thousands of people who are refusing to pay to see his 'I am Jesus' show.

Brand stated: 'If all these people can afford to pay their heating bills I can see no reason why they cannot come to my show and see how brilliant I am'. He went on to state that:  'I've just bought a new house in Los Angeles and really need the money.'

Brand then went on to flatly refuse to hide behind a mask of anonymity preferring to be well and truly in the limelight.

Or was the light from the bonfire of his own vanity?
Posted by Tristan Hazell at 3:22 AM No comments: Links to this post

Email ThisBlogThis!Share to TwitterShare to FacebookShare to Pinterest
Labels: Russel Brand, self importance, self promotion

Having lived through the sixties and seventies and seen the way people behaved back then in the pre-aids let's get laid years I'm pretty disappointed to see that the coppers seem to have forgotten that they were accepting a quick fuck from underage girls in return for not nicking them for trumped up charges.

In the sixties none of my female contemporaries wanted a boyfriend of their own age... They wanted to get shagged by a DJ from the Radio 1 Roadshow and would duly bunk off school, dress like a tart, lie about their age and then hit on whichever DJ was there. 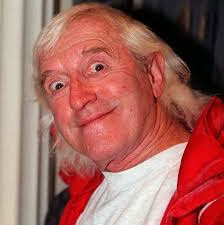 The guys I knew back then who joined the police force would regularly be seen at parties (in uniform) doing pills and spliff before going off to nick kids for the same and steal their gear.

In terms of corruption the police were and are far worse than those they police. Operation Yewtree seems like a way for elderly coppers to assuage their guilt about the underage girls they regularly sexually abused in return for leniency.

When are the police going to investigate the sexual abuse that exists within their system?


Posted by Tristan Hazell at 10:41 PM No comments: Links to this post