There is something wrong about Christmas. Ask the trees! 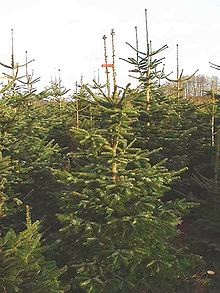 150,000,000 trees will be cut down for christmas in Europe alone. god knows how many in the USA and the rest of the world. These trees will then spend two weeks dying in living rooms in order to honour a victorian fad which has absolutely nothing to do with the fanciful notion of the virgin birth of the son of a non existent god. (The truth is more likely to be that Mary was shagging a neighbour while Jo was away, got knocked up and decided the best explanation was that she was visited by a randy god. People were more gullible back then... Did Jo then go out buy a tree, smother it in tinsel and lights in order to advertise his wife's infidelity? I don't think so).

At the same time we in the West scream blue murder over the evisceration of the rain forests elsewhere on the planet. Ironically the eradication of these forests  is necessary in order to feed our endless need for burger meat and palm oil here in the West.

It should be an absolute law that for each conifer (most of them non native) cut down and sold, the purchaser should either plant or pay to have planted a deciduous tree native to their country.

The idea that christmas trees are a sustainable resource is nonsense. Of course the suppliers will grow more for future years but they make little contribution to the well being of the planet.

Plantations of non native conifers on Welsh and scottish mountainsides have long been an unnecessary eye sore.

You want green stuff in your house for Christmas? Do what the ancients (who knew far better than us) did and pick some holly, ivy and mistletoe!