Were Damian Hirst paintings taken from Notting Hill Gallery stolen to order? Or was it 'The Swallow'? 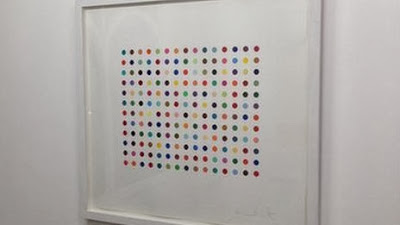 One of the stolen paintings which were taken off in the back of a car. The police curiously say that they are surprised that the paintings were not spotted in the car… How did the spots disappeared is perhaps more of a mystery than the disappearance of the paintings themselves as the perpetrator was caught on CCTV.

Two Damian Hirst paintings have been nicked from the Exhibitionist Gallery in Blenheim Crescent. W11.

As an artist myself I do understand the need to generate a bit of publicity when one's name has been absent from the press for a few days. there are a number of ways one can go about this: Drunken loutishness in public; Marriage to an unsuitably young girl; open drug use in a palace lavatory; having ones work stolen from a gallery or 'bidding up' ones own work at auction.

One could of course produce some noteworthy original work but I fear that where Hirst is concerned it is impossible to imagine him ever producing something original.

So did Hirst order the theft for publicity purposes?

I have however been sent a photograph of notorious local art thief known only as 'The Swallow' seemingly rolling around on one of the paintings in question. 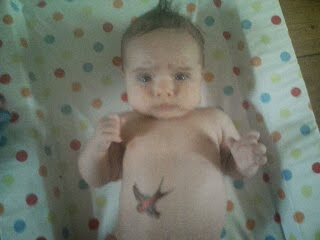 Who is The Swallow?
Why did he not use his normal MO; creeping through cat flaps?
What unscrupulous tattoo parlour did the tattoo?
Is Damian Hirst that desperate for publicity?
Who cares?

Posted by Tristan Hazell at 1:43 PM