What Easter is really about: Destruction of the rain forests.

Now, I think I have got this right:

A rabbit was crucified for impregnating the Roman Emperors pet chicken. 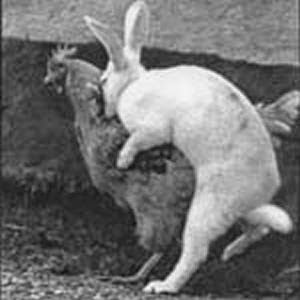 When taken off the cross the rabbit was thrown into a briar patch. Unbeknown to everyone, the rabbit was not dead and scuttled down a hole into his warren to re-appear some days later and be heralded as the Messiah.

The hen laid a dark brown egg. The hen was equally revered.

We now buy 5 million tons of chocolate eggs in order to celebrate the union of the rabbit and the hen each Easter. To meet the demands for chocolate eggs the rain forests of the planet are being destroyed in order to make room for vast Palm oil farms  (hence Palm Sunday) to supply the oil which is now the main ingredient of cheap chocolate. The deforestation and the planting of non-sustainable plantations is having a major negative effect on the planet.

If we really cared about the planet and the cycle of life that Easter originally celebrated before the Christians got hold of it we would be planting a native deciduous tree each spring and boycotting the chocolate industry.

Email ThisBlogThis!Share to TwitterShare to FacebookShare to Pinterest
Labels: Easter