An occasional guest blog by Morgana, the Sultana of Boo. Her views are not necessarily my own.


One of the first truth's I have learnt in my short life is that it is far better to have just enough money rather than shedloads of the stuff. If you have too much money you forget what a treat is and ones life flattens out into a salt pan of excess. Just enough money means that one can have a real treat that doesn't involve flying to the Seychelles in a private jet.

It is the Muse's birthday today so I took her and the poet out for lunch, a late lunch, at the Electric diner which is attached to the cinema (which in my opinion should show more films like Bambi) which is part of the Soho house chain. 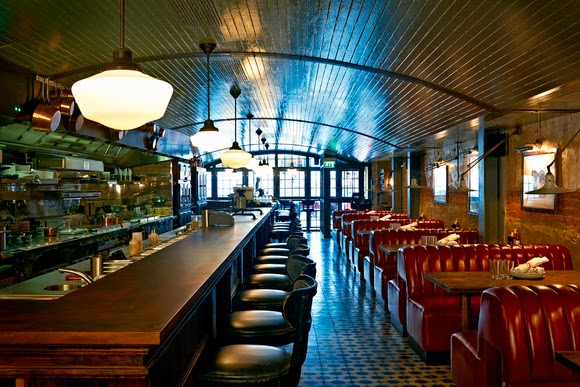 Inside it is nice, because it is a long tunnel of a space it feels like a tunnel but with light at the end of it but without any trains. There is a long bar on one side and booths on the other. We had a booth and I got a clamp-on baby seat which meant I could stand up in it yet still be strapped in. This is important as I spend most of my time practising standing at the moment with a view to walking soon.

The staff were lovely and the service great, I made a point of smiling at all of them, my fur coat was much admired.

The Muse had chicken in a honey glaze thing and the poet had a burger and fries. I browsed from their plates.  It is Diner food but very up-market diner food and very good.

No one complained about the mess I made and when I threw in a scream (of joy) or two no one raised an eyebrow.

With two glasses of wine and a pint of beer the bill was very reasonable and no more expensive than a number of local 'gastro pubs'. They also do a good kids menu and if you have a cinema ticket the bill is halved which makes me think it would be a cool place for a birthday film/dinner type treat for a young lady… Especially if they were showing Bambi.

When we left the poet left his phone behind but the waitress came after us with it. that saved a lot of swearing I should think.

In all a treat for not much money in an interesting place with friendly staff and, unlike the Seychelles, no danger of being bitten by a crab.

Anyway. If you live in Portobello Road you don't need to be rich because your life already is.

NB. Only nylon animals were harmed in the making of my fur coat.