A Serious Pest Control team was called in to a garden in West London today to deal with a rare carnivorous marrow.

The owner of the beast, Jan Nieupjur, told me:

"When the plant first started growing by the compost heap I thought it was a self seeded courgette but over the weeks the bugger just kept growing but never producing any fruit. A couple of weeks ago, having taken over the garden it suddenly produced something. In the space of 10 days it became rather larger than a courgette. I thought: OK it has aspirations of marrowhood, but it didn't stop there, it started to resemble a green pumpkin.

A few days ago the garden became empty of birds, even the wood pigeons disappeared, and then the neighbours started to lose their cats (no bad thing to my mind) and small dogs so I knew something was up.

I sat up last night with a torch and a bottle of schnapps to keep an eye on things and was amazed to see the vegetable pounce upon a nocturnal squirrel and eat it. Bugger me I thought: This thing could eat one of the kids so I called in the pest control people who confirmed (by inspecting its mouth parts) that it was in fact carnivorous". 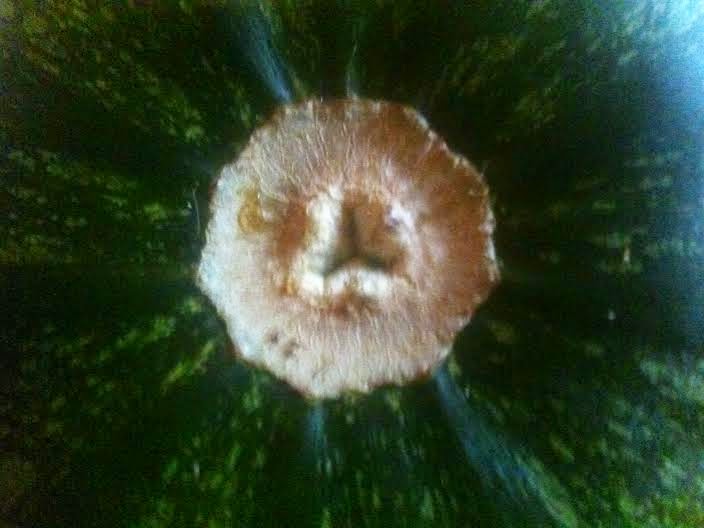 Mouth of the carnivorous Marrow

A spokesperson informed me this evening that the Marrow has been taken to a secret location in Kensington where it will be propagated in order to grow more of the monsters in the local parks in order to eradicate the rough drinkers congregating therein.