Advice to Vegans on arriving in Hell. Meat your maker.

Believe it or not quite a lot of vegans go to hell. Percentage wise there is no difference between vegans, vegetarians and omnivores (all carnivores naturally go to hell). 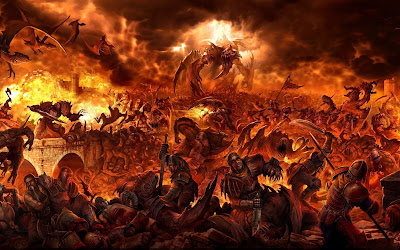 There are barbekew pits in hell but, as no animals go to hell the only meat available is human flesh and rule 17 of the terms and conditions of entry states that only volunteers may be roasted for human consumption.

Lucifer, at his waggish best, informs all vegan arrivals that, should they give themselves willingly to the barbekew pit, they will be reborn in Vegas. Vegans queue to be barbed only to discover, on incineration and human consumption, that they find themselves reborn in Las Vegas with a chronic gambling habit, no money and a craving for pork. Therefore condemned to an eternity of scouring the sidewalks for dropped coins to feed slot machines and hot dog leftovers while they stew in guilt.

At this point Vegans often turn to meat. To meat their maker so to speak. To speak of the injustice of judging man by his diet.
Posted by Tristan Hazell at 9:47 PM