Terry Wogan pulls out of Children in Need after threats from Damian Hirst. 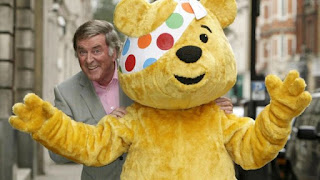 Terry Wogan  has announced that he is pulling out of Children in Need after threats were received from Damian Hirst over the use of his 'Spot' painting on Pudsy's bandage.

Hirst is reported to claim that: 'I fucking invented spots, how dare they use them to raise money for children in need. If you don't want needy children don't fucking fuck. Don't go nicking my ideas without adding to my millions.'