Memory. I Remember very little of this.

I wrote this 40 years ago. It hasn't improved in time.
Memory will go.  That is what life is about, the future relies on the past and the past relies on memory and as memory diminishes so the future becomes less…less what, I’ve forgotten.

How I got to Judy’s house I cannot remember. I was 18 and fucked on amphetamines dope and alcohol and looking for a bed. I turned up with a bottle of scotch and a hold all.
She had a terraced house, a husband in prison, a young daughter and a drawer full of drugs. Oh! Yeah she had rats in an aquarium. We drank the whiskey, tried many sorts of her dope and some of her liquid LSD and laughed a lot and laughed a lot more and then she showed me the stairs to my room before showing me her bed: she said you can go up there or stay down here…I was 18, fucked on amphetamines, dope, alcohol, LSD, the pheromones of a middle aged woman and the scent of fear from caged rats. I chose her bed. Less steps to climb. We eventually sublet my room.

We sublet my room to a fat single mother whose baby I often mistook for a pig whilst melting into the soft furnishings on paranoid trips.

For a lot of that time I did not know whether I was toothpaste or cornice moldings or both.

Judy had admirers who would come round and cook her crap meals without knowing that we were shagging in the downstairs loo and laughing and then laughing about that. 35 years later I can I don’t blame her.

She had a Mini clubman, green, British racing green. Fuck... I had to go. The husband was coming out of prison. I could not (would not) fight. We went for a picnic on cleeve hill as some sort of goodbye thing. The child Rosie was with us as we lay under the elephant trees and talked of what might be or might have been. The beech trees were monstrous with bark like grannies elbows and she told me she loved me through a gap in her teeth. I was closer to her daughter’s age than hers.

I went into the woods for a piss, as I stood micturating against a tree I sensed something and ducked; a sock full of nuts bolts nails and screws clouted into the tree just where my head should have been. I managed to wrestle the weapon from Judy’s grasp and force her to the ground. Needless to say she was loud.

Subdued she seemed pleased to miss. I asked her what she had intended and she told me that she wanted to kill me and then write obscenities over my body… She opened her bag, it was full of lipsticks… I cannot remember how this ended. It is true but I cannot remember… I’m alive so she didn’t kill me.

She said she didn’t want me to leave her.

Her husband had been imprisoned for stealing among other things underwear from washing lines. When he was arrested he was wearing it. He had curly blonde hair and a heroin habit. It was 1973 and David Bowie said everything was possible. But I didn’t think a ménage a trios with a middle aged mum and a cross dressing junkie was anything like probable let alone possible.

Tristan, scuse the french but it is fucking hard being a parent.

Me and Babs have bought this Lesbian Gay Transgender thing hook line and sinker but when it comes to getting little Duke into a dress he says he ain't no girl no matter what we says and when we says that he ain't got no say in the matter he points his AK at us and tells us to turn off that goddamned K.D.Lang rekkid and look at his dick.

His brother Duane is sick of the fighting cos he reckons it messes up his concentration on his embroidery he is doing for his latest frock and can we turn K.D.Lang up and why ain't he got no front bottom.

Babs says that that nice Mr Trump don't want us to do nothing but stay in the trailer and teach the twins to shoot Mexicans.

I said. Babs you is a Mexican.

She said. So shoot me.

How we laughed at that Tristan.
Posted by Tristan Hazell on April 27, 2016 No comments:

I am one of Ginsberg's coughers
I sing in my dreams, sleeping
alongside the woman, who,
dreaming of the truth,
never remembers on waking.
Posted by Tristan Hazell on April 24, 2016 No comments:

I will come to call you friend.

marbles filched from the attic

I will come to call you friend.

David Cameron admits that he does not benefit from the trust of a single person in the UK. 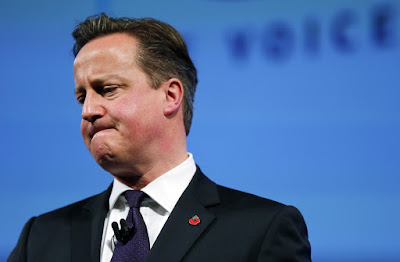 Cameron came clean today and admitted that no-one trusts him. But he went on to say that: 'Amongst his cronies and peers, no-one trusted anyone so nothing is not as it should be and a corrupt government would be foolish to consider trust to be an important part of it's job fleecing the country.
Posted by Tristan Hazell on April 07, 2016 No comments:

The postman rang twice the other day. I answered the door and Asked: Why the urgency? He asked if we had a baby in the house and when I said yes he said that's ok then because this parcel is rattling in an urgent kind of way.

It turned out to be a package from Rusty: 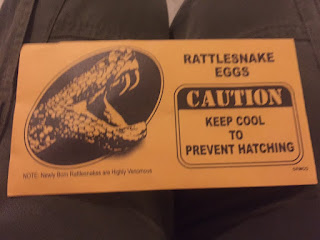 A box of Rattlesnake eggs.

There was a note:

Babs and me were kinda regretting buying the twins pink AK 47's for their third birthday so bought them  a box of these to compensate.  The boys now spend their time in the trailer eying the eggs, aiming to shoot the rattlers when they hatch before the critters get them. It means that Babs and me can move about a little easier knowing that them AK's ain't aimed at us constant like.

Anyways. Here's a box of eggs for your little one... they make for a mighty interesting egg hunt on a warm spring day.

According to documents leaked to me from Panama over the past couple of days It appears that housewives throughout Britain are regularly laundering money accidentally left in trouser pockets. Even the Right honourable Mrs. Cameron has been guilty of the offence. 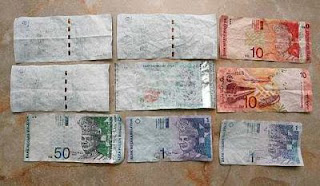