A stabbing on Portobello road. 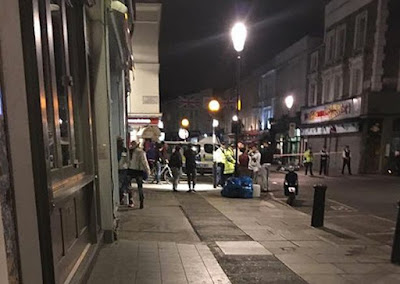 We have had a killing on Portobello Road. A 17 year old was mercilessly stabbed to death by another teenager in broad daylight. The killer killed his victim, killed his own future in the process and killed all hope for the victims family for whom my heart bleeds. The killer killed all hope for his family...How can you live with that. The killer killed any justification for allowing children to discipline themselves.
The killer should be handed a copy of 'Lord of the flies' to read in his cell as should his parents as well as the rest of us.
The reason for the killing, from what I can surmise from talking to kids and locals, is that the poor boy was in the wrong place at the wrong time while the undisciplined children of the neighbourhood went out looking for someone to blame for their miserable lives armed with knives. They picked on him rather than picking on their parents.
I am a step parent of sorts to a 13 year old boy. He hates me because he sees my desire to protect him as a desire to control. If he listened to me he would realise that all I want to do is help him survive this mad world. Survive this mad world in order to do all of the shit he wants to do without getting stabbed.
Stabbed by the kid sitting at the desk next to him.
I do not know the victim or his family to whom I can only offer tears, tears I openly shed on Portobello Road this afternoon surrounded by schoolchildren standing at a loss at the makeshift shrine.
Do not blame the children. This is bad parenting.
Posted by Tristan Hazell on July 06, 2016