The 1940 'Leave the Allies' Referendum plan. 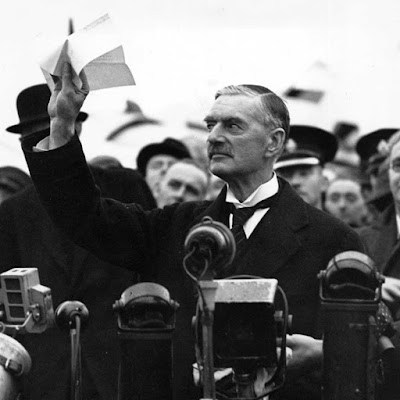 By September 1940, 2 months into the blitz it was feared that the RAF and and British air defenses could not cope with the relentless bombing. Things looked bad for this beleaguered island but Chamberlain had a plan.

The prime minister informed his cabinet that Britain was to hold a referendum on the question 'Should we leave the Allies and join the Axis union?' "It is a win, win situation". He told them. "If we win we become masters of the Planet once more and relive our days of Empire. If we lose we will benefit from massive reparation which will enable us to grow into the most powerful nation in Europe".

"On top of that". He added. "The 350,000.00 we are currently spending on air defence can be spent on cottage hospitals and stuff like that".

When asked about German atrocities he replied: "We have been turning a blind eye to Russian atrocities quite happily up until now I can see no problem in simply changing the direction in which we cast that blind eye".

"We'll be slaughtered by the Americans". Another cabinet member opined.

"Au contraire". Chamberlain retorted. "I have been reliably informed by my cleaning lady that Japan is about to piss off the Americans greatly by attacking Pearl Harbour which will embroil America in a war of it's own along with a new found obsession with building it's 'Pacific Wall'.

A muttering of: 'Who is Pearl Harbour?". Chinese whispered it's way around the Cabinet table.

The rest is not history.