The end of the local. Gentrification and social cleansing in West London and empty speech bubbles.

QED: On an evening stroll to the KPH for a well earned pint I notice that the gentrified boozers on the manor are all empty. The KPH, although not rammed, had  local customers and was welcoming. UKAI (once the Market Bar) and the Italian Job (once the Pelican/Red Lemon) were completely empty and soulless. 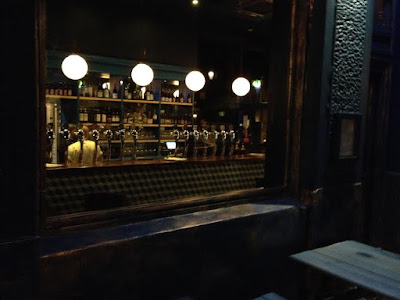 The photo is of the Italian Job on All Saint's Road, taken through the window at 9.30 pm on a Thursday night.. The white orbs in the photograph the empty speech bubbles of a non existent clientele. This neighbourhood was once vibrant, varied and multicultural. It is now being sedated into morbidity by the 'pills' pushing gentrification and social cleansing..

All Saint's Road is, to many, the heart of the community. RBKC seem determined to replace that heart with a wind up toy that the locals are financially excluded from and the wealthy incomers are bored with already.

I suspect that it is hoped that All Saint's Road will become another Kensington Park Road, appealing to and catering for the wealthy alone.

Theresa May and the last remnant of democracy.

Oh dear.
The tories will not be defeated by posting slogans on Facebook to be read by the like minded. The people who could possibly make a difference are the ill informed self disenfranchised who have been bullied and cowed into believing that it is not worth voting; the delusional working class conned into aspirations that are pure fantasy fuelled by the snake oil purveyed by Tory tub thumpers and the press and those who simply cannot be arsed to register to vote let alone vote.
Sheep have no free will, they abide by the law of the dog. The mandarins of Weaith are the shepherds whistling to the dogs. Theresa May is the Alpha bitch among those dogs. At the end of the day you will find her lying at the feet of her Masters gnawing on the bone she has been thrown.
That bone is the last remnant of democracy. 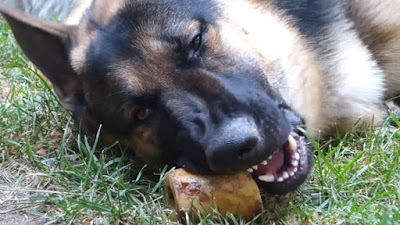 Fencing off the 'Village pump'. 'DOG in the MANGER'. Why the KPH is important and Why I won't be reviewing the 'Italian Job'.

Years ago before the arrival mains water and domestic plumbing the village pump or well was a hub within the community. It is where ordinary people met on a daily basis; where the lonely found some company, where gossip or news was shared. It was where linen, both dirty and clean, was aired. It was where 'Care in the community' existed before the term was hijacked by politicians in order to justify a lack of care or concern or an unwillingness to spend taxpayers money on the needs of the taxpayers.

After the plumbing arrived the pump or well, although still symbolic, ceased to be that hub. What was left was the village pub which served the same purpose.

Not only was the pub a hub, the good pub landlord was a marriage counsellor, a referee, a psychotherapist, a keeper of the peace, a short term loan provider and a friend. Very little violence occurs within the walls of a well run pub. To be barred from the village pub was a fate to be feared, it was exclusion from the community, it was ostracism.

The wealthy landowners and gentry did not need the village pub save for occasional visits for purposes of condescension, a leer and a grope at a pretty barmaid or to buy a secret bottle.

In this part of West London these hubs are vanishing to be replaced by hipster gastro pubs, Vodka breweries, estate agents offices and expensive apartments. The local working class community is being deprived of one of its focal points and is being offered no alternative. All the 'gentrifiers' see is a need to make a profit and a need to, in order to make themselves feel comfortable with their consciences, remove hoi polo from sight.

By 'gentrifying' the last remaining pub, the working class local community is in essence being told that their needs are in no way to be considered... Fuck off!

The re-imagination of the 'Red Lemon' on All Saints Road as an expensive Italian, hipster, artisanal, craft beer 'pub'/restaurant is a perfect example of this. 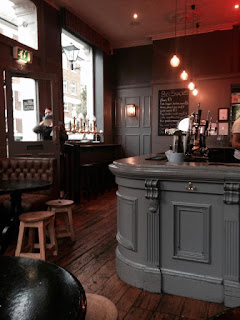 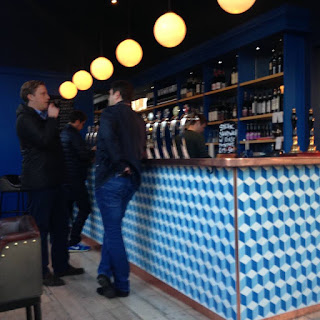 RBKC do not help in any way by allowing this sort of thing to take place because RBKC decision makers aspire to the same elevated personal Utopia as the gentrifiers themselves. No consideration is given to the discrimination against and displacement of the local community.

The only place for a reasonably priced beer now is either at home or on the street. Gone is the only refuge for the working class man wanting a beer or two on his way home or an escape from a potential domestic crisis.  No one cares, just 'KEEP OFF MY LAND'.

Gentrification often wraps itself in terms such as: 'Exclusive'.... To exclude; 'Discriminating'..... To discriminate against,  'Artisan'..... Pretentiously expensive in order to exclude poor people.

The village pump has been fenced off by people who only drink bottled water and champagne.

All the Gastro pubs and hipster bars should be forced to call themselves: The DOG in the MANGER'.

All of the above is why the KPH on Ladbroke Grove should remain an honest local boozer. 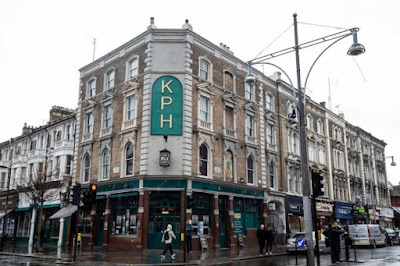 It is the last one. If RBKC had any sense, care or imagination they would tax the gentrifiers a bit more and spend the money on buying the KPH freehold and giving it to the community to ensure the continuing existence of our village pump.

Popped in to look at the Silchester Estate development proposal exhibition this morning. Residents were out to protest the proposals.

I'll be writing about the development plans at length at a later time. 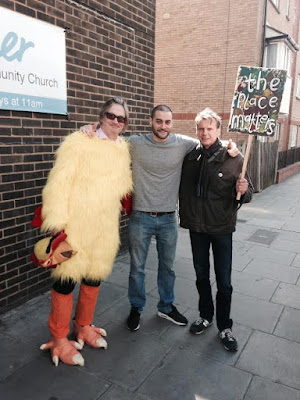 Got to say hello to 'Lowkey', someone previously not on my radar, an interesting man. Check out the video below.

And then read this: http://www.mintpressnews.com/MyMPN/after-being-targeted-by-the-uk-govt-british-rapper-lowkey-returns/