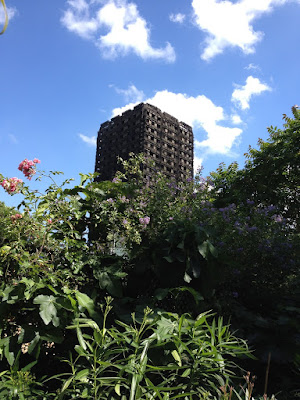 I was not going to write about this yet, it is all too much but in the light of some people criticising me for naming the Council leaders many feel responsible for the disaster it now becomes necessary.

I live, temporarily, within metres of the tower, it looms over the garden in which I have a small cabin. I was woken on Wednesday morning at 1.00 am by a neighbour screaming 'get out of the building'. From the garden I saw the fire beginning to creep and then rocket vertically up the entire tower. The fire was external and it was evident that it was the cladding that was burning. As the fire reached windows they popped and the fire entered the building on every single floor simultaneously. The fire then raced around the tower, engulfing it.

I sat and watched in helpless horror. I listened to the cries of those trapped inside. I watched them waving and flashing lights from every floor. People jumped.

What is worse, far worse, is that I sat with the 13 year old daughter of the house who had friends in the building.

We watched this for the entirety of the horror. The screaming went on until daybreak and beyond, the figures in the windows disappeared one by one as the fire engulfed them. How does one comfort a child in that situation?

1. RBKC had been warned about the likelihood of this happening for some time but chose to ignore the warnings.

2. RBKC threatened legal action when the Grenfell Action Group published their concerns about the buildings safety.

3. The cladding, non fireproofed to save money, was there to prettify the building for the incoming gentry. It had nothing to do with the needs or benefit of the residents.

4. It is well know that the same cladding was implicated in similar disasters around the world. It should never have been installed. Had the building not been clad the likelihood is that the fire would have been contained to one apartment and none of this would have occurred.

4. There are grave concerns over other 'renovation' issues regarding the integrity of the building.

5. RBKC have current plans to redevelop the entire estate and gentrify it.

6. Both Fielding Mellen, head of housing and Paget Brown, council leader are culpable and should be brought to book. Fielding Mellen owns a house in the shadow of the tower yet he refuses to show his face. In his one televised interview he looked dry mouthed and scared. He could answer no questions coherently.

All of the above are true facts with evidence to back them up. It is not gossip and rumour. I have previously published the RBKC legal threat to the action group on this blog and am happy to share other evidence.

Is there any wonder that there is anger here.

As things stand. We have been warned that the house may have to be evacuated. The tube trains have been stopped out of fear of the tower collapsing. We are behind the no-go cordon and getting in and out is a nightmare. The area is full of gawking disaster tourists who have no place here and most importantly of all the authorities are so scared of the public reaction that they will not release the true death toll. IT IS MASSIVE.There is the constant threat of a full scale riot. Van lots of riot police dot the area.

And a gutless Theresa May is demonstrating that this government has no care for these people because they are the poorest of the poor in the wealthiest borough in the UK.

so shoot me for naming names.

I know this post is a rambling mess but that is how it is at present.

UPDATE. Sunday: Community notices being posted stating that the true death toll is 150 - 200. Something the authorities will not admit, fearing the reaction.

THANK YOU FOR NAMING NAMES TRISTEN ,THANK YOU FOR POSTING THE THINGS YOU HAVE .THE AUTHORITIES MUST BE SHAMED AND WE MUST ALL BECOME MUCH MORE INVOLVED WITH DECISIONS THAT EFFECT THE ENTIRE COMMUNITY KNOW WHO IS IN CHARGE AND HOLD THEM TO ACCOUNTABILITY ,THIS HAS BEEN ABLE TO OCCUR BECAUSE THEY HAVE OPERATED UNDER A BLANKET OF BUREAUCRACY AND THERE IS A STRANGE INERTIA THAT OCCURS IN REGARDS TO LETTING THOSE IN POWER DO AS THEY PLEASE UNCHALLENGED AS LONG AS IT DOES NOT NEGATIVELY EFFECT PERSONALLY .GREED AND CORRUPTION HAS FLOURISHED AND GREED AND CORRUPTION CAUSED THIS.IT MUST BE ERADICATED .THANK YOU FOR ALL YOU HAVE WRITTEN

I read, on the Radical HOusing Network, people refusing to relocate to Birmingham are being classed as making themselves intentionally homeless.