What to do with Grenfell Tower now. 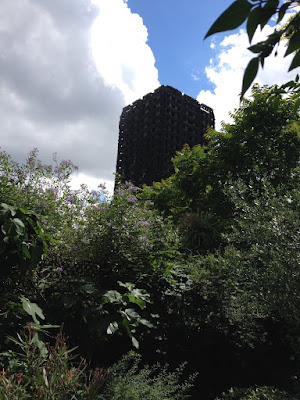 OPTION 1. Keep it standing, a blackened rotting tooth in this denticured gob called London... Once the horrendous task facing the counters has finished leave exactly as it is, leave the detritus, the ashes, the echoes of screams and the silhouettes of ghosts burned into the walls.

Keep it as it is save two things. Two entrances:

One marked 'The rich door' leading to an express lift to a viewing platform planted with wild flowers in memory of the dead on the roof, from where the whole of this 'fair city' and its injustices may be viewed save the tower itself. No one who is wealthy, greedy, bigoted or all three should be allowed access to this door.

The other, marked 'the poor door' leading to the single blackened stairwell that provided the only means of escape from the inferno and then into each flat, one by one and then finally to a vacant window hole on the 24th floor where there is one choice: either throw yourself from the window or throw your entire wealth save that you realistically need to live on to the good of the people. Only the wealthy, greedy and the bigoted will be granted access to this door and it will be compulsory to all.


Option 2. I lied about two options.