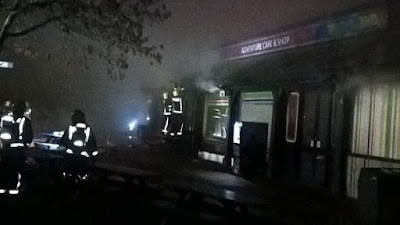 Regents Park Christmas, not a mouse stirred
the fondue burned on the hob
setting alight the zoological caff
the meerkats were not doing their job...

No alarm was raised by any a beast
not gecko lion llama nor gnu
they all slept on contentedly
as an aardvark died in the zoo.

By the time the fire brigade got there
by an extremely circuitous route
the aardvark had met an untimely end
perfectly roasted en croute.

Now it's hungry work putting fires out
as any a fire crew will attest
so they fell upon that poor aardvark
in a mob of high visibility vests.

At the end of the meal, the aardvark all ate
they belatedly decided to thank it
so toasts were drunk and cheers went up
for that perfect pig in fire blanket.


Posted by Tristan Hazell at 12:23 AM No comments: Links to this post