Country pursuits are few and far between in London so you can imagine my delight on being invited to an evening's fly fishing in Kensington Gardens by my old pal Buffy.

Imagining trout rising in the Serpentine I packed my rod and favourite flies and headed west to his mews pied a terre in Notting Hill. Buffy answered the door with tears streaming down his cheeks.
"My god Buffy, what on earth is the matter". I exclaimed.
"Just cutting bait, old chap". Was his reply and he went on to explain that far from stalking trout in the Serpentine we would be after the Husk of hares that had colonized Hyde Park and Kensington Gardens. Apparently Princess Diana had released a breeding pair from Kensington Palace in order to piss off Charles, they were his favourite pets and she felt received more affection than she, shortly after their marriage.

The hares bred like rabbits and today there are more than 2,000 of the critters living in the meadows. Early on the Hares developed nocturnal habits and are rarely seen during daylight hours. An annual cull takes place in February, carried out by the Coldstream Guards armed with high powered air rifles fitted with night sights, as the local communities blithely sleep on unaware of the ongoing carnage nearby.

Buffy has set up the Kensington hare fishing club in order to take advantage of this bounty. fishing is of course banned in the Serpentine but there is no such constraint to fishing in the grass. Twilight was the optimum time for catching the hares which came out to gambol as the park quietened for the night.

The cause of Buffy's tears was laid out on the butchers block in his well equipped kitchen. 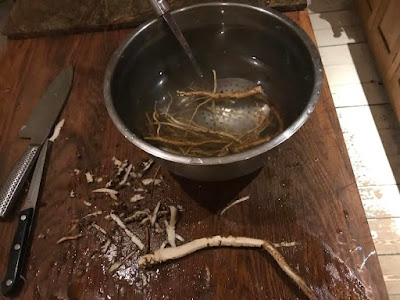 "Horse radish". Buffy exclaimed with relish. Apparently, through much trial and error, this was the best bait for the job. A 'tail' of horse radish was wound into the fly and proved to be irresistible to the animals. Buffy went on to tell me that he had previously used asparagus but found that it often disintegrated on casting. The fibrous horse radish however, grown on his roof, not only had the required stringiness to stay on the hook but also the whiteness of its flesh made it easy for the hares to spot in the gloaming.

After preparing a dozen flies, more lure than a fly to my mind, we filled our hip flasks with cherry brandy and set out.

Kensington gardens at dusk is a magical place, lit by the amber metropolitan glow and swathed in a faint winter mist, silent but for the cough of foxes, grunts of alfresco lovers and the rustle of rough sleepers bedding. we arrived at Buffy's chosen spot, close to the Diana memorial ditch on the southern bank of the serpentine.

"They seem to congregate here, probably where the first pair were released". Said buffy.

I remember, long ago stocking the memorial with a dozen rainbow trout for a spot of sport many years ago after I had been arrested for fishing in the Serpentine. I was arrested for that too. 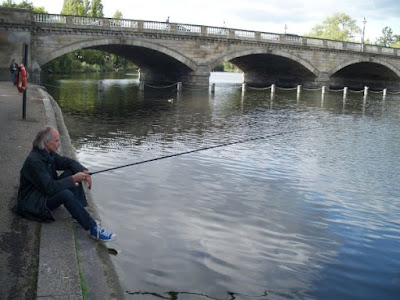 We set up our rigs and, with some scepticism on my part,  cast our lures. to my astonishment and joy the hares rose to our bait as cast after cast we snagged them. Once hooked the animals fought hard, cutting zigzag courses through the meadow, one or two were lost when the line snagged on a tree. I was using a 10lb mono filament line and made a mental note to upgrade to a 20lb braided line next time.

By 10.00 pm we had a decent bag of 17 animals, no specimens but all of a good size, and as the last of the cherry brandy slid down our gullets decided to call it a night.

Later, back at Buffy's house we hung the beasts on olive trees for the night ready for butchering the following day. We sat late into the night, celebrating our success with a bottle or two, listening the urban foxes as they congregated beneath the hung hares, salivating frustration. 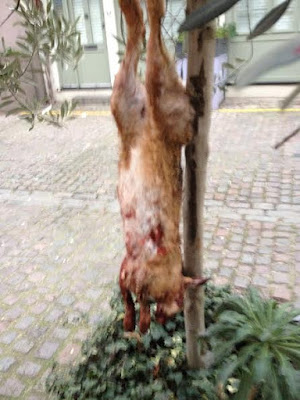 Hare in an olive tree. 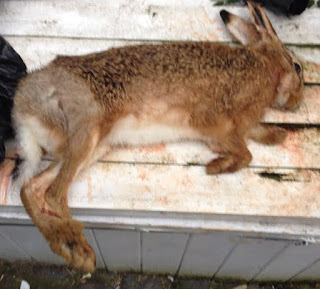