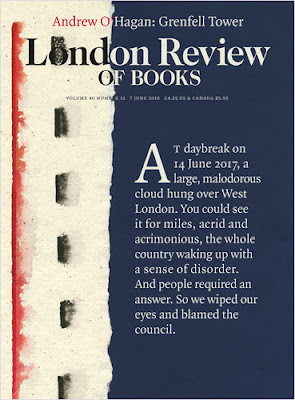 The publication of this thing does no one any favours except RBKC councilors, Pagett Brown and Fielding Mellen in particular and  of course O'Hagans bank account.

What is wrong with it:

The timing of this publication, before any inquiry has been concluded and before any results are published demonstrates an arrogance of monumental proportions on the part of O'Hagan.

It is biased conjecture at best.

It fails to acknowledge absolute facts regarding the cladding of the building in favour of defending the councilors who. for whatever reasons, allowed the work to be carried out. The argument that RBKC's use of dangerous cladding was ok because everyone else was doing it is laughable.

It casually lays blame on the Fire Service for the number of deaths. It does not point out that, but for the cladding mistakes, the Fire Service, having put out the fire on the fourth floor would have gone home. Job Done.

O'Hagan is so keen to defend and praise Pagett Brown and Fielding Mellen and others that he has completely missed the big story. I would point him in the direction of Companies House records.

I could go on and on but I won't beyond saying that the entire thing is so flawed and biased that it even casts doubt on the facts that it gets right.

It is a monumental piece of 'up my own arse, look how clever I am, journalism' with no concern for truth or justice and a very keen enthusiasm for Town Hall brown nosing.