A very rare pygmy elephant has been discovered 'trapped' in a Notting Hill basement. the animal is unharmed and seemingly quite relaxed about the situation. 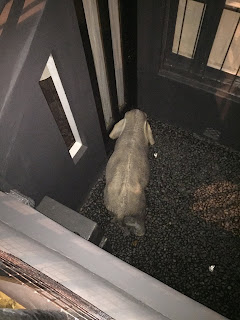 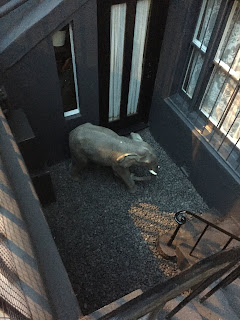 Due to the rarity of the creature and the fact that no such animal is registered in any UK zoo it is assumed that the elephant has escaped from one of the many illegal sub-basement menageries that are suspected to exist in the affluent west London area. This would also explain the animal's laid back attitude to its current situation. It is assumed that the owner will not come forward to claim the illegally imported beast.

Sumatran pygmy elephants are only found in Sumatra and on the island of Mauritius where they have been kept for centuries as an ornament to the famed bonsai Baobab gardens, where they stand motionless for much of the time, that are unique to the Indian ocean island.

The owner of the house where the elephant was found and who prefers to remain annonymous stated that she would prefer it if passers by would refrain from feeding the animal buns as the crumbs were difficult to clean up.

Although the creature, now named Elaphant n daroum by local schoolchildren, seems happy enough a rescue attempt will be made in the next few days.