State of the Nation report. Bring out your stupid. 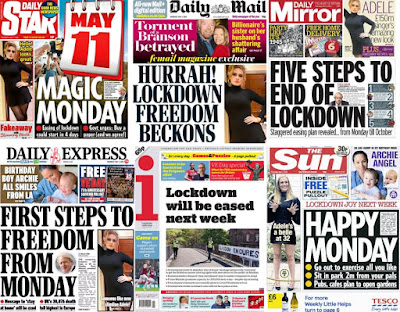 While Boris and co dither in the Downing Street bunker the Government fed tabloids scream at the thick, the stupid and the poor that lockdown is over in order that as many as possible contract the virus  while the Times reports that lockdown is here until July.

To the Government the economy is far more important than lives. As in America, the sums have been done and decisions made. It does not take a rocket scientist to see what is coming next....

Today is VE day. I am having to park a German car in front of the house to protect myself from the combined forces of the Queens Own Stupids and the Boris Yout who will be out in force napalming the country with every Coronavirus laden victory exhalation. Is that irony?

The sane have two options today: 1. We can bunker down and sit it out.    2. We can attempt to fight them on the beaches, in the parks, at the street blah blah blah.  I'm opting for the former. Never in the history of Britain has so much stupidity been displayed by so many to protect the wealth of the few.

The plague carts will rattle over the cobbles once more and the air shall fill with cries of:'Bring out your stupid'.

Meanwhile in America Trump sits in his counting house trying to decide who to go to war with in order to distract the Nation, whilst they die in their Tens of thousands, from his Venal, narcissistic and callous stupidity.