Trump sells the USA to Bezos before fleeing to Cuba.

My man in the White House tells me that Luz Morales; the presidential fluffer, overheard a conversation between Donald and Jeff during which Trump agreed to sell the States to the squillionaire for an undisclosed cash sum.

Later Trump told Luz that he had: 'Got a good deal, a,very good big deal, a clever deal, as the country isn't worth shit these days'.

Trump then boarded Bezos force One heading for Cuba.

The United States of America will now be known as Terror del Bezos. 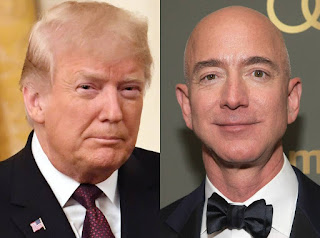