Two tales of a city.

A small quiet street in Notting Hill, once, until gentrification, a no go area for all save the MP's and socialites looking for drugs, kicks and low escapes. Now an expensive enclave, gated at each end by the sheer will of the parvenu residents.

Picture this:
One daylit evening during lockdown a local guy, working on a repair job on a restaurant close by, a restaurant he looks after during this crisis (I often see him watering the planters late at night) needs a hammer. He goes home to pick one up. On his return to the job he is stopped for no reason save that he ain't white and middle class and that The Police have declared that the area be bounded by a Section 60 order, allowing them to stop and search without reason. He is surrounded by police officers, I counted 12 at one time. His hammer is bagged for evidence, you bet he got pissed off, so would we all but when have you ever been threatened with a tazer because you were going about your job with the tools of your trade.

Having been handcuffed, arrested, vanned to Charring Cross police station, banged up, then finally released with no charge, he gets home in the early hours the next day.

Compared with:
Just metres away a few nights later a bunch of over privileged white folks hold yet another party in the street complete with ping pong table and chairs blocking safe passage. I called the police at 9.00 ., Nothing happened. I called the police an hour later, nothing. Yet both times (I have the reference numbers) I was told that an officer would attend and advise the revellers that they were in breach of social distancing rules. I then went online, reported it again, nothing. 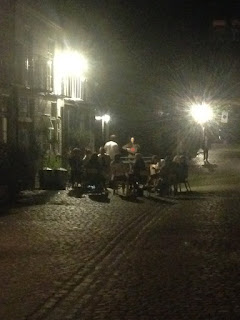 When I tried to talk to the revellers they sneered, even the guy my age who told me that the rules were too difficult to understand (I kid you not) even the woman who told me that because they all lived in the street it was OK. What she wanted to say was 'because we own our homes and are rich we can do as we please, Boris and Dom say so). I told them they were killing their parents generation with their selfishness. They sat there in scornful silence, mentally counting the inheritance once daddy was dead. Inheritance spawned by empire and slavery.

I went home to let this all sink in, to write about it, to write about it close to tears. Tears of horror at what England has become.. A country in which the poor pulled together and the wealthy pulled apart like wolves at a carcass.

Kill me now. I'm sick of my country.

NOTE: I have photographs of both occurrences and know the names and addresses of those concerned. I shall photograph them all in the light of day  then publish them on this post. The only way to deal with irresponsible idiots  is by being responsible, remaining cautious and  pointing out why they are potential killers.