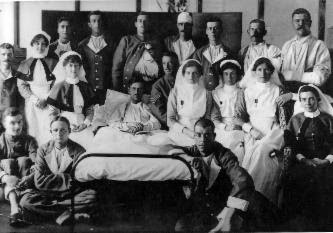 This time of V  E day celebration reminds me of My old friend Jan's Uncle Harry.

Harry fought in both World wars but it was in the great war that he acquired a certain notoriety as 'the man with three eyes'.

He lost an eye in the trenches of Ypres, then, while convalescing lost a testicle in a brothel in Arras. The circumstances of which he never disclosed. He was repatriated to Britain for treatment.

The doctors soon replaced his lost eye with a glass one but prosthetic testicles were not available at that time, however a sympathetic surgeon opened him up and popped in another glass eye.

Harry was thereafter subject to much ribald teasing in the mess hall and his tales of what his inner eye had seen became legendary.
Posted by Tristan Hazell on May 09, 2020