Rusty in lockdown with a sharp knife. 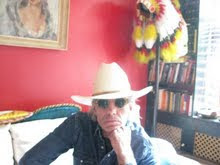 I said What goes Rusty and he said America has gone to shit since the feds decided to protect Trump rather than shoot the fucker. If the virus don't get us Trump will.

I said that it goes like that here with Johnson.

We both said "We're fucked" at the same time. We are too old to say Jinx.

He said: Loving her is like loving a very sharp knife with a mind of it's own.

I said: You could leave her Rusty.

He said: Never turn your back on a very sharp knife.