The Orange Squatter has declared the statue: "No longer relevant" in his America and sends out the wrong message to the World. 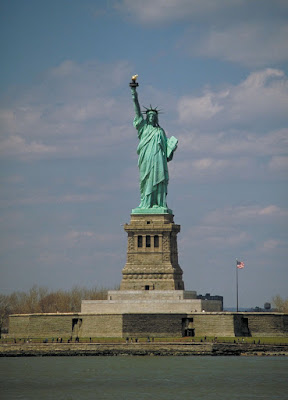 SPIT or the American dream.

Molly and John had been childhood sweethearts
Shared sodas at picnics
in the meadow by the Big Loving
as it snaked easily through the county.
Shared illicit beers beneath the bleachers
when she cut cheerleading and he cut track.
Shared moonlit skinny dips in the same old Big Loving
at the sand bar on the bend
where the turtles basked back in the day.
She had run naked laughing through poison ivy;
he had spat in his hand and rubbed it in the itching places.
Later she did not need the ivy to make the itch,
she had an itch of her own
and he rubbed his spit onto that itch
but that itch never completely went away.

Molly took that itch to New York.
John took his spit to LA.
Molly found music in the cafes at night,
revolution in the air.
‘New York City, imagine that’.
She wrote him - as she itched at a sidewalk café
– in an early westbound letter.
‘Yes I can imagine that’.
He had replied.
But he couldn’t.
So she itched in the city
closed her eyes to the viscous string of men
while he spat on the coast at a succession of starlets
who practiced the Stanislavski itch
tunelessly singing the Hollywood orgasm.

Fast forward…
The two of them came together again,
out of boredom most likely.
Boredom and guilt,
prompted on her part by the metronomic click of the clock,
on his part by the young guns on the boulevard
the fear that he was all spat out.
When they married the orange blossom was already dead.
The children when they arrived
trod the rotting petals into the floorboards
of their Chicago brownstone.

He made money; she spent it.
The American dream.

Molly sat on her itch for twenty years,
took a course in etching early on
never looked back and couldn’t look forward.
Her life etched itself into her face.
She got a part time job
filling condom machines at railway stations.
Twenty years of itching and etching on molly’s part
as she watched john occasionally drool diddle his secretary
(did he buy his condoms at the station?)
was enough.

Molly came to Spain
change of life,
change of continent,
change of tense.
for a week.
John had grudgingly agreed that she could take a vacation,
a break from the shattered life they now shared.
She would visit a friend in Toledo
maybe take in an El Greco or two.
On her last day of work prior to traveling
the itch had slipped a dozen condoms into her purse
then dragged her into Victoria’s Secret on the way home.
The flight was uneventful;
she sat between the two overweight boors
each airline is obliged to provide.

Marta met her at the airport.
The Spanish air crackled.
The bullfight was - to Marta - an odd choice
for an afternoon’s entertainment
but Molly had read Hemingway,
wanted to sit ringside
black beret scarlet lipped
as Eva Gardner had once done.
She had little experience of bloodshed save her own;
but blood in the afternoon held no fear.

Manolo arched his back,
flicked a disdainful cape
at the snorting bull
an ubiquitous sneer at the crowd,
stood in his black slippers
stained with blood and dust
hawked a glistening gob of spit
that sizzled as it hit the sun scorched clay.
The bull died bravely as bulls in such tales do.
The spit dried to a disc of mother of pearl
that shimmered against the blood red earth
as the bulls ear parted unhearing from the head;
arcing it’s way into the stands,
into the lap of Molly.
An unrecognizable Molly.
Molly lost, Molly found. Molly free, Molly bound.

‘Manolo.’
She whispered much later
when the sun had gone down
and the fiesta had dissolved itself
into the barrios and tourist hotels.
‘Manolo.’

I took up the dog eared copy of THE TIN DRUM.
It fell open at the chapter titled ‘fizz powder’
I read to her again of little Oskar
spitting into the navel of Maria.

Molly flew to Boston four days later
made her morning connection to Chicago
.....in good time.

The fire-fighter moved dazed
through the rubble of what had once been the World Trade Centre.
The dust was thick and acrid
he wished he had some kind of mask or respirator.
He hawked and spat into the debris at his feet,
onto a small black slipper.
A slipper stained with blood, dust and tears.

America.
Posted by Tristan Hazell on February 05, 2013 No comments: