PLEASE DO NOT MESS WITH YOUR PRESCRIBED MEDICATION WITHOUT CONSULTING YOUR GP.  I talk to mine and I spent years researching my condition.


If you are looking for a new age vegan organic macrame prophylactic, move along. there is nothing for you here. 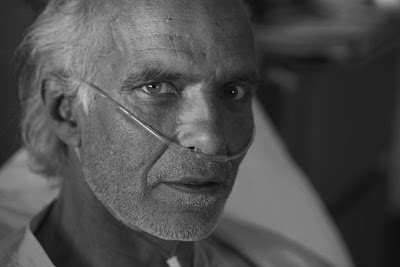 Photo: David Petch.  He was hoping to shoot a Warholesque death bed scene. I was obliged to disabuse him of that notion.


I acquired a chronic lung disease ten years ago. To this day neither I, my GP nor specialists have a clear idea of what it was, but whatever it was it reduced my lung capacity by 70%, stripped me of my immune system and left me permanently exhausted, breathless, stressed and occasionally hospitalised. I also have a morbid fear of flu in winter, a dose of which would kill me without touching the sides. They tested me for AIDS.

Hospitals, those places designed to cure are for me a threat; bugs lurk there. I try to avoid them but the advice from my GP is to dial 999 rather than calling him when I get a flare up. I prefer to sit it out with a combination of drugs and CBT.


I know my eventual killer well, I have been studying him for the past ten years, I know where he lies in wait, in dark damp places, we meet from time to time, play Russian roulette with an air gun ( one chamber of which is empty) before moving on. My GP recognises my knowledge of my condition and allows me the driving seat in prescribing, changing or stopping medication.

Although in itself it will not kill me, pneumonia will do that, stress is my biggest enemy, it is the finger-post for my piper at the gates of dawn. Stress causes breathing difficulties which exacerbate the stress which exacerbates the breathing difficulties leading to collapse, sometimes in public places which is uncomfortable as passers by frequently mistake my condition for 'social problems'. In the early days I would call an ambulance, get put on machines and oxygen until things calmed down.

These days, being wiser, I do nothing of the sort.

I call a good friend who drops everything, picks me up from wherever I am incapacitated, tells me I look shit, drives me to a calmer place, invariably offers his personal panacea (a beer and an appalling bad joke) then lets me get on with stressing in.

After having been drawn graphs and charts by specialists ten years ago I gave up smoking. I kept that up until stress got the better of me. I now self medicate with a cigarette.

After a chat with a GP this course of action was quietly endorsed but not officially. I asked him how much longer I would live by quitting smoking and would I have that extra time at the beginning of the rest of my life or at the end, bedridden and artificially aspirated. He told me: 'The latter'. Pass me a fag.

I was prescribed anti-depressants for the stress after I found myself living in the shadow of Grenfell Tower at the time of the Government backed arson attack by cost cutting councillors waging their social cleansing campaign ( a story for another time). Once prescribed I was left taking them for years.

My new regime, which works for me, is as follows:

I kicked the antidepressants into touch a few weeks ago, I weened myself off them, having spoken to a GP, slowly over a period of a few days, Yes, during lock-down, replacing them with a request for Diazepam, which was happily prescribed. I would take one or two now and then as needed. I've given them up now but keep a stash in case of serious problems. I must take the daily steroids and bronchodilator for the rest of my life.

I have a rescue pack of serious Steroids and antibiotics at hand.

I have given up the blue inhalers synonymous with asthma relief... I do not have asthma so why do I need it. It is prescribed as a matter of course for anyone who's condition is dumped in the COPD file. I take a drag from one from time to time, I like the placebo buzz. The remaining inhalers in my possession I shall use to fill balloons come Carnival's return to sell to unsuspecting seekers of incremental brain cell death. Or hand out to children at Halloween (they all seem to have asthma these days).

I no longer worry about anything outside of my control. I don't give a shit about shit. I take half my originally prescribed drugs but take half an hour for them to kick in before even considering action, smoke, write poetry in my head and no longer attempt any physical exertion that might have my lungs rattling like an ebb tide on shingle. Friends know the score and do not mark me down for it.

I've been in solitary lock-down since just after Christmas, the past twelve weeks of which have been spent in a delightful friend's equally delightful house. I cook, eat, water the roof garden and write in rotation and feel healthier than I have done for a long time. I experiment with arcane ice cream recipes. I'm ready for Hell.

Lastly, I like myself these days. Enjoy my own company, laugh at my jokes. Living alone in isolation is difficult unless you are happy in your own company and can look yourself in the eye. I'm lucky my head is full of stories, anecdotes, memories and poems, I awake mentally reciting unwritten verse then pounce upon paper and pen. I am in part my own best medication. It took a long time to find out and I aim to take my time enjoying it.

I no longer wake up and smell the coffin.