Caligula at the Coliseum. Madness, bonking madness but brilliant! 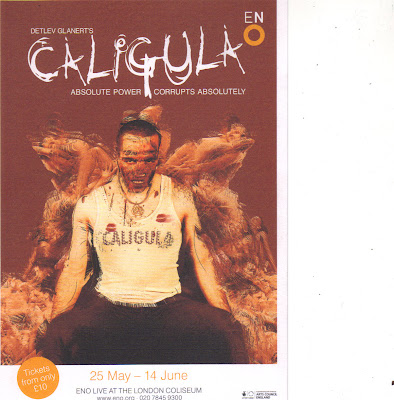 To the Coleseum this morning with Mr Pounce the barrister to see the dress rehearsal of the ENO production of Caligula.

Fantastic set, minimalist if you didn't count the 301 seats on the terrace facing the audience... But brilliant in that the action back stage happened up high and with equal importance (if you are up in the gods). An almost vertical stage in fact.

The music out of context would be impossible. Modern I suppose in that it wasn't waltzes and the like. You knew from the moment it started that no fat woman was going to be singing this one out.... It weren't going to be over until the dead woman sang and sang beautifully as Caligula strangled her.

Throughout the performance the ghost of the sister wanders naked around the place, Wagnarians would be disappointed; she is a slip of a lass. As far as naked wandering goes the girl has it all, she is a star, you could ditch the singers and the band completely and still have a show. In the second half she wandered naked whilst painted gold. Who said opera was boring... Loyd Webber could make a whole show out of the poor girl doomed to walk the stage of the Coliseum naked, night after night, without the offer of even a cardigan to keep the chill at bay.

Caligula died at the hands of a mob of hoodied thugs on the terraces after having dragged both Mr Pounce and myself through his madness.

It was interesting to note that, at the end, the non-singing, non talking, naked lass got the loudest applause...

I for one enjoyed the thing immensely.

ENO 'Death of Klinghoffer' at the Coliseum. 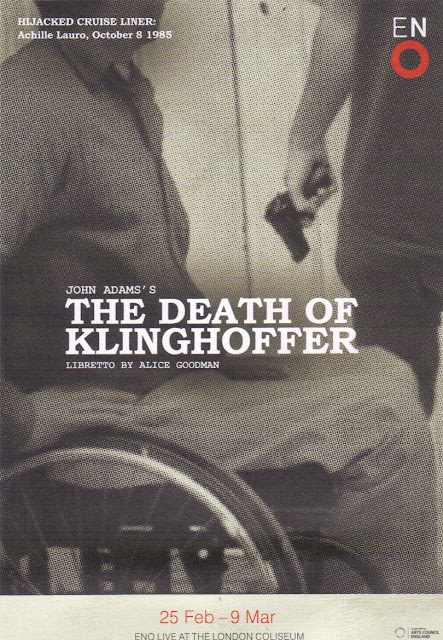 10.00 am I was at the coliseum in London for the dress rehearsal of the controversial opera ' Death of Klinghoffer'. An odd time for opera, but perhaps the ENO thought it wise to stage it then to avoid the possibility of demonstrations against it; 10.00 am is far too early for demonstrators to do anything other than rail against the alarm clock. On its debut the opera attracted an amount of complaints due to it's subject matter. The opera centres on the 1985 hijacking of the Italian cruise ship Achille Lauro by the Palestinian Liberation Organisation. The hijackers killed one of the passengers, a retired, wheelchair-bound 69-year-old American Jew named Leon Klinghoffer. Goodman's script imagines what happened on the ship.

The English National Opera (ENO) is putting on seven performances of the opera at the London Coliseum over two weeks. It is being directed by Tom Morris, best known as the co-director of The National Theatre's smash-hit adaptation of War Horse and helming the controversial musical satire Jerry Springer: The Opera.
Originally opening in Brussels in 1991, the opera courted controversy even before a single note of John Adam's music was heard. Critics condemned the artistic merit of the play, questioning whether art should be made out of a tragic incident.
From what I saw and heard this morning I can only assume that the piece relies on controversy rather than content. Sure it was good enough, save a weird disco-beat moment, but there was nothing there to captivate, no character to empathize with, no romance and no great songs. the best of it was to my mind the hard working chorus who had the biggest role... It was disappointing to note that, in the blurb handed out pre-show, the production team got name checks down to assistant hair and make-up and the women altering and dyeing the frocks whereas the chorus were left un-credited. Very odd indeed. 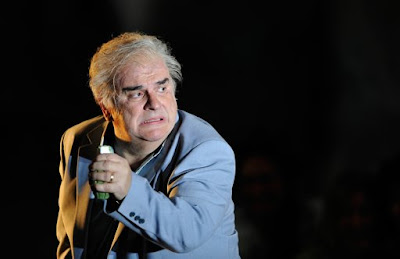 
The set relied heavily on projections with bits of deck and superstructure wheeled on and off during the production, Is that normal in opera?
The band was great, I sometimes felt that the singing detracted from my enjoyment of the music. The libretto was clunky and decidedly un-lyrical (something one can tolerate in work translated from German or Italian but disappointing in a work written in English), I am by no means an expert but as a poet I hankered after a bit of poetry. I was expecting gun shots so was not surprised by them apart from the moment when the harpists string broke with an unscripted bang.
All in all interesting to witness rather than a great joy or great art. More like a wacky modern history lesson with music.


Have I said that I enjoyed the chorus?


This is what Rabbi Shmuley Boteach has to say about it in the Huffington Post: http://www.huffingtonpost.com/rabbi-shmuley-boteach/does-the-english-national_b_1273025.html
In case you were wondering, Shmuley is the bloke who brought us 'Kosher Sex: A recipe for passion and intimacy'. People often ask me if I make stuff up, with material like this I don't have to.
Posted by Tristan Hazell on February 23, 2012 No comments:

ENO Tales of Hoffmann at the Coliseum.

To the Coliseum last night along with the muse, Mister Pounce the barrister and his delightful squeeze; Wilhelmina for the dress rehearsal of the ENO production of  Jaques Offenbach's 'Tales of Hoffmann'.
What a delightful thing it was, beautifully designed and lit, plenty of humour, wonderful singing, plenty of dying women, student drinking songs and a gorilla....What more could you want. 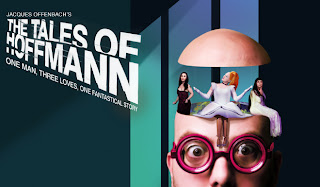 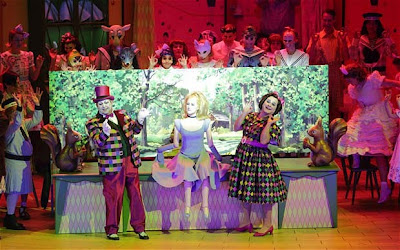 Posted by Tristan Hazell on February 09, 2012 No comments: