The Guardian, racism and negative stereotyping. Flooding in Wales!

I'm not posting a photo for this item for obvious reasons. But then I found this from SKY news: 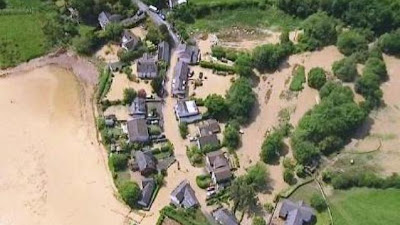 There has been some flooding in Wales recently. A very good friend of mine has family in the worst hit area. I checked out the guardian online site for news and I was offered a collection of pictures to view.

What does that tell us? It tells us that the gooood people at the guardian consider wales to be a land of caravan parks and nothing else. Obviously in Guardian land Wales is infra dig and without any true culture other than caravans.

The Guardian even made up captions for anonymous caravan parks, placing them in villages that do not have such things.

Perhaps the guardian editors and hacks are celebrating the rains as a means of dousing the fires in their holiday homes.

While we are on the subject it might be a good idea to return the Hay festival to the Welsh people and send the brit/pseudobrit literary wankers back to their tin foil barbecues at their poncy self indulgent literary onanist do's at bankrupt (financial and moral) country estates.

The Guardian used to be better than this.

Historical note: the guardian used to be the Manchester guardian. The majority of middle class Mancunians (and Liverpudlians) spend their holidays blighting Wales with their caravans (a caravan is the height of chic up there I'm told) and it is a known fact that most posh Mancunians are conceived in a caravan in Rhyll... Conception of course follows seven pints of llagwr and a cwrry! Really really posh Mancunians buy a holiday cottage near their caravan which they then burn down themselves for the insurance
Posted by Tristan Hazell on June 12, 2012 No comments: