LOCO at the Grand Union, Tammy Weisgerber and Rob Alder.

LOCO has gone weekly, demonstrating that one can never have enough of a good thing. Despite having put out a call for cowbells none were forthcoming and I was forced to shelve my planned premiere of the 'Poem for Cowbell'. Oh well! Another time. Many thanks to Odrin for the rock n roll poem guitar solo.

This weeks surprise was provided by the appearance of Tammy Weisgerber in the audience who very kindly allowed herself to be persuaded to do a couple of numbers accompanied by Paul Greendale...  then came back on later to duet with Rob Alder. Powerful stuff. Rob finished the evening off with, along with 'The Freak Elite', a couple of Led Zeppelin numbers. Loud, rowdy and rousing. Rob has a great rock/blues voice. Check him out!
Posted by Tristan Hazell on September 05, 2011 No comments: 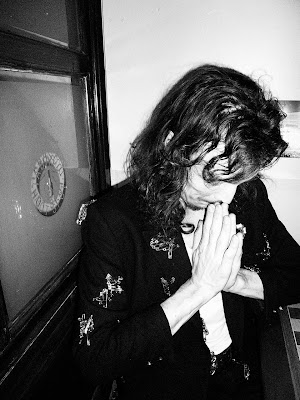 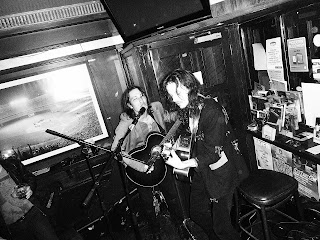 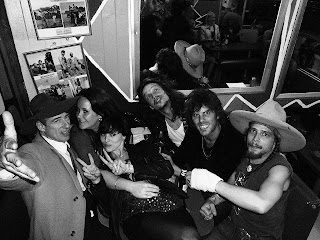 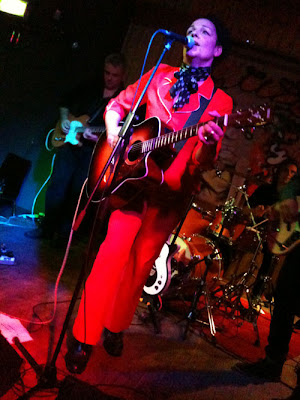 Loco Cabaret at the Grand Union.


That's the expression I was looking for.


Loco Cabaret happens fortnightly at the Grand Union bar which is situated on the corner of Woodfield road in W9 (a two minute walk from Westbourne Park underground station) and overlooking the canal. Last night seemed like a good time to check it out. I know co-host James Simmins from past events at the Island and the Tabernacle and was curious as to what they were getting up to at this recently started residency.


I arrived early, bought a beer then sat in the garden watching the sunlight fade on the (let's be honest) turgid waters of the Grand Union canal. Flotilla's of ducks picking their way serenely through the water-borne detritus of city life added to the scene.


There was not a big crowd in the place (at one point early in the proceedings James was able to thank his audience personally and by name) but not surprising considering it was Easter Saturday during a heatwave and then suddenly beset by rain, fat meaty globs of rain which cleared the air but cleared the streets.


Laid back is what you get at Loco Cabaret, nothing pretentious or earnest, the sense that everyone involved was enjoying themselves was present and there was an interesting mix of acts:


Very good Jazz/blues guitar  from "Panama" Dave Parrett and Kalvin Zemzaris opened proceedings followed by Orson Deimel, Kosmic Troubador; who is quite frankly mad as a hatter and hilarious, Neil Anderson, the delightful Emma Lyndon-Stanford, Cuthbert 80 - rapper/singer extraordinaire and James himself with co-host Dan Antrubus. Dan along with Marty from Asian Dub foundation on bass gave us a refreshing take on 'Foxy Lady' (excellent). There was also Dave on djembe and Simon, & Christine on bass.

All in all rather akin to being at a party full of musicians and singers and the door onto the garden made smoking breaks a doddle.


The next one is on May 7th. I heartily recommend it.