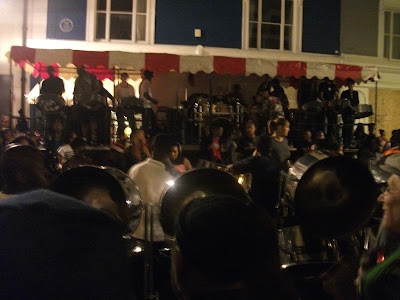 The Friday night before carnival was always the high point for many locals. Recently the powers that be had stopped Mangrove Steel Band from playing in the street; it was traditionally the last pre-carnival rehearsal and an opportunity to play for the community but thankfully this year they were back. Wonderful!

Brilliant director Andre White is back behind the baton, Matthew is there behind the drum kit and so many familiar locals are making life good.

I find carnival itself far too crowded and intimidating so to be able to see these very dedicated people perform in the street on this night is magical. It is also magical to bump into so many friends and neighbours sharing the joy.

thank you.
Posted by Tristan Hazell on August 23, 2013 No comments:

There is a god or at least there is a god of Carnival. A secular god though; keen on a bit of spliff, a drink or two and steel pan.

Having been forbidden to practice in All Saints Road Mangrove Steelband played in the Tabernacle courtyard. Wow. The rain stopped, the sky turned blue and we were treated to carnival of our own. A brilliant event.

The god of Carnival turned out to be a Mangrove fan. Our resident (at the Tabernacle) Steelband won 'Panorama'; a battle of the bands held annually. For 12 months they are now ' The best steel band in the UK. Well done Matthew Phillip (manager and drummer) Arranger Andre White and everyone involved. It is a 12 month labour of love for the whole team. 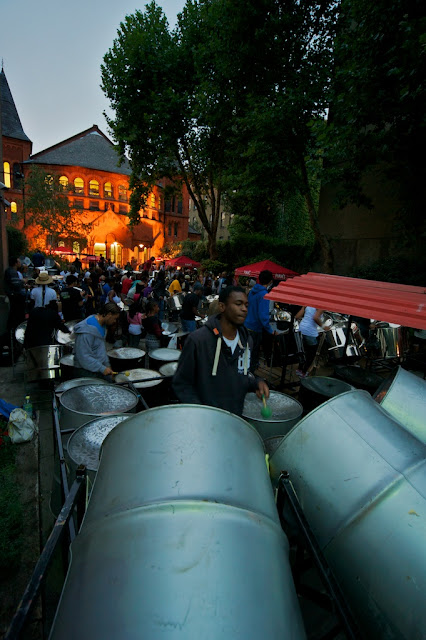 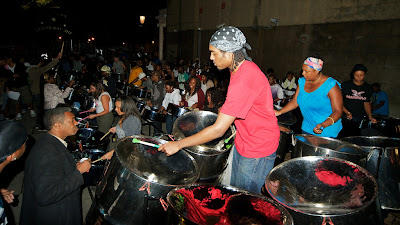 
Saturday night found me at 'LOCO' Carnival special at the Grand Union on Great Western Road... A marathon 6 hour session with some great performances from some of our favourites. I managed to get in 20 or so poems with backing from James Simmins and Jono willis. Delphi Newman was great as always as were Mario Nardi, Chrystina Tomlin and Rob Alder. Roger Pomphrey delivered on of his pyrotechnic performances. Fishslice Pbrowse defies description; you would not believe me. It was a happy night.

I was wakend at Midday (I had gone back to bed for a little nap) by the loudest fucking noise on the planet. I was house sitting in the middle of Carnival, about 30 metres from the sound system in All Saint's Road. The house was vibrating. The only thing to do was to get out into the thing.

There was a big police presence, far greater than last year. High viz vests in abundance, every street corner held a group of them. It turned out that they were not needed after all. As the day progressed it became more and more clear that this was going to be a very peaceful and happy Carnival. I spent a lot of the day either at Gaz Mayalls stage or at the nearby Tabernacle. It all ended on the dot of 7.00 and I spent the evening walking through the detritus with a friend checking it all out. A lot of police lined the roads as the army of street cleaners went to work. It is extraordinary how they get the place ready for the Monday; they do an amazing job.