The rain is relentless.

I decline Moll's offer of her pink umbrella and suffere the consequences as I attempt to travel across London by means of public transport; the tube system is truly awful and explains the miserable demeanour of it's occupants.

On the street I no longer get any satisfaction from splashing through the puddles although my preference for Converse in all weather probably has something to do with that. Moll is on at me constantly to get some work boots with steel toecaps...

Surely the toecaps will rust in this climate.
Moll is posing for another artist. Typical; she knows I am blocked, unable to write, yet she dresses in loose clothes (so as not to leave elastic marks) and heads off for Mayfair in order to inspire another.
I walk her to the underground station and on the way she finds a couple of discarded photographs lying damply in the street. Is this where you found the pornography the other day? I ask.
Somewhere near here. She says, passing me an old poloroid of two sisters standing fully and impeccably dressed on a beach.
I glance at the photograph then look again in shock. Moll notices my hand trembling. What is it? she asks. 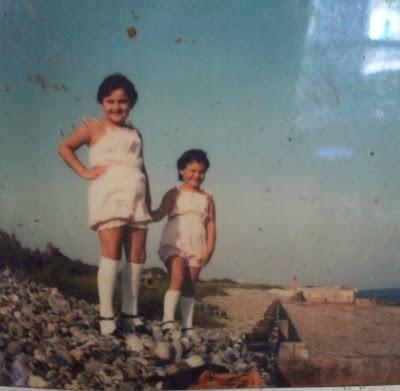 I am too distressed to tell her that it is a photograph of Tilly and Buddy, daughters of a woman named Agat who had been my muse many years ago . I had once possesed an almost identical photo (probably taken the same day) of the girls.
Agat had traced me and sent the photograph with a note that read:
'The girls at Dungeness.'
Posted by Tristan Hazell on November 13, 2009 No comments: