An evening on the roof and my thoughts turn to liquorice. 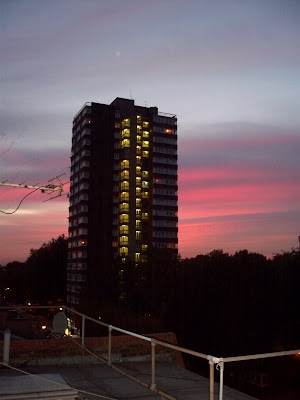 I remember, as a very young man, falling in love with the daughter of the woman who ran the village sweet shop. I would go into the shop daily to spend the pennies I had won at various games in the school yard. I went to the sweet shop in the hope of setting eyes on Marie-Anne, but she was never there, she was always somewhere else.
Practicing the oboe.
Her mother would give me an understanding look and then hand me liquorice.
It is only now, having done much research, that I realise that Marie-Annes mother was doing her best to reduce my testosterone levels to something manageable.
I learnt that liquorice was indeed used to reduce testosterone in men (not that I could then be described as anything other than a boy)
and was also a contributing factor to low IQ levels.
I had not been given enough of the stuff to make me stupid enough to not kick the liquorice habit.
I turned to gobstoppers. But where to put the half sucked suckers, when later on, Marie-Anne met me behind the bus shelter and the mood turned to love?

I cannot hear the oboe without thinking of Marie-Anne and gobstoppers.
Posted by Tristan Hazell on October 23, 2009 No comments: