One summer, back in the sixties I had been invited to a weekend house party at the country estate of my old friend and drinking companion Bertie.


I have over the years attended many of his parties and knew that I should expect the unexpected. To that end I packed my last remaining army issue (other ranks) condom.


One of my fellow guests was a Hollywood starlet of a certain age, known for her sense of fun and willingness to entertain the boys; I shall out of respect for her family refer to her only as 'M'.


Bertie was terribly excited about his new passion ballooning and his recently purchased ex MOD observation balloon. It was helium filled and therefore required no great expertise.


I suggested, with a wink, to 'M' that she might enjoy a ride in the contraption as well as the sumptuous views of the English countryside it would afford. She quickly agreed with an equally ostentatious leer.


With Bertie acting as winch man 'M' and I climbed into the basket and were sent skyward.


It was a windy day and rather than rise directly upwards we rose at an angle of 45 degrees and eventually found ourselves some half mile from the launch site and 300 feet above a wheat field. I put it to 'M' that we might, having wrung every ounce of pleasure from the views of very small things, enjoy a little pleasure of our own making. she agreed with relish and I pulled from my back pocket my last remaining army issue (other ranks) condom. Her coquettish giggle turned to a cry of dismay as a sudden burst of wind plucked the condom from my grasp and sent it tumbling to the wheat field below.


I was not going to be deprived of my sport by this eventuality so threw a rope from the basket and abseiled down in pursuit of the condom. Once on the ground in the middle of the wheat I started searching for the thing, trampling down the crops as I went. I decided that an increasing circular search was the best plan and occasionally directed by 'M' from above I spent a good hour tramping about.


Alas I never did find that condom and eventually accepted defeat. Climbing back up the rope was a damn sight harder than the downward journey and before I had reached the basket Bertie decided that we must have had enough and started winching us in, in the process dragging me through a number of mature oaks and the centuries old Scots pine. I landed some moments before 'M' and was able to scuttle into the house to change from my shredded clothes and also avoid the icy looks from my erstwhile companion.


Dinner that night had something of the 'cold collation' about it as far as myself and 'M' were concerned.


Bertie entered the breakfast room in a state of excitement the following morning. I say everyone. He exclaimed. It seems we have been visited by aliens while we slept. The estate manager has discovered the most extraordinary phenomena in a field of wheat not far from the house and insisted that I take the balloon up to see it from a better altitude. He went on to say that he had taken a camera and photographed the thing. He then rushed off to his dark room.


Half an hour later he returned waving a soggy print. Here., take a look at this you chaps! 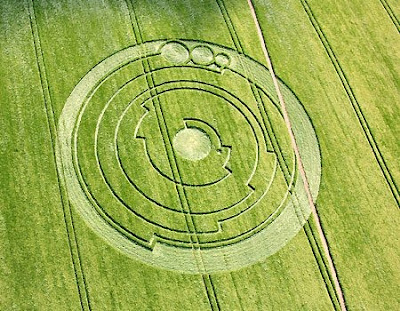 Is it not extraordinary. Definitely the work of aliens and probably some sort of signal to be read from high above...I must call the MOD immediately he said and alert them to this danger.

I lowered my eyes, inwardly groaned and took great interest in my prunes.
Posted by Tristan Hazell on November 07, 2009 No comments: